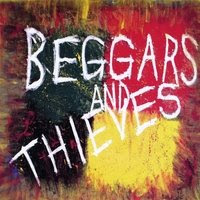 Centrevol took their brand of melodic rock across country in 2006 from their home base in Boston to Long Beach, California looking for the overnight LA success story. What they found instead were the trials and tribulations that face a new band in an overcrowded media market, spending much of their first year sleeping in one bedroom, with a hand-made triple-bunk bed. The band worked at odd jobs and fought LA traffic just to get to rehearsals. Never looking back or looking down, Centrevol kept the faith and kept clawing their way upward. The band's outlook is much different today. After winning the $10,000.00 grand prize of the Mai Rai Rumble, Centrevol had the resources to fund their full-length debut, Beggars And Thieves. Written mainly about their experiences in L.A. (including rabid bicycle poachers), Centrevol have found a soft edge against which they lay their brand of melodic rock and roll.

Beggars And Thieves opens with She Moves Me (Like A Song), sounding a lot like classic U2. Vocalist Pete Guinta has something of a Bono sound, and the music could fit in with late 1980's U2 catalog material quite easily. Flame and Fifth Avenue Dream continue on this track, although Fifth Avenue Dream has a little more punch than you might expect. Fifth Avenue Dream may be the most commercially viable song on the album. Centrevol changes pace with Lose Yourself, a gorgeous ballad about the value of integrity ("And if you sell your soul for a song / who will sing along?"). The song has gorgeous harmonies and a swaying melody line that sticks with you.

Pretty Machines has an unusual opening that sounds like something out of the Queen songbook before returning to the U2-style grand themes. Too Much To Ask is another turn at the trough of balladry and has the sort of pensive, angst laden song that tends to hold prominence on mix-tapes and teen comedies about love. Safety is perhaps the most frenetic song on Beggars And Thieves, moving along at a dangerous pace and turning out as perhaps the best rock song here. Other highlights include the bardic Beggars and Thieves, the melodic punk rocker Rumor and Dose Of Hope.

Centrevol is going to get tagged as a U2 clone. I don't think that can be avoided as there is a lot of similarity in their respective sounds. There is enough of a difference here to call them cousins and leave it at that. Centrevol is a highly talented group writing great rock melodic rock songs that sit on the outer edge of the pop wheel. Beggars And Thieves may have been a major hit twenty years ago. Today it will likely be an underappreciated yet still incredible album.

You can learn more about Centrevol at http://www.centrevol.com/, where you can purchase a copy of Beggars And Thieves direct from the band. The CD can also be purchased at www.cdbaby.com/cd/centrevol2.