Review: Leah Randazzo - At The Root 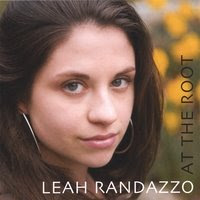 Northampton, Massachussets hides a secret gem in Leah Randazzo: An artist who claims to be a shy homebody who gets sassy behind the microphone. Luckily for us the secret is out. Leah Randazzo traipses across boundaries between jazz, R&B and pop with a big, beautiful voice that demands to be heard. Her songwriting is mature well beyond her twenty-four years, and best of all she’s still at the stage in her career where you can see her in small venues. Her debut album, At The Root, is a stunning display of her charisma, voice, and surprising maturity as an artist at such a young age.

At The Root opens with My Weapon, a funk-laden jazz number that displays Randazzo's raw vocal presence in all of it's multi-hued glory. Leah Randazzo sounds like Fiona Apple with better phrasing and tone. Her voice runs hot like a stove pipe and drips with wanton energy throughout At The Root. All I Need In You mixes Tower Of Power horns with an Al Jarreau style arrangement for a very listenable musical patois. Passes Me By goes for a slightly more traditional jazz arc built around bass, percussion and minimalist guitar. Randazzo is at her most sultry here in a performance that will melt your speaker wires.
Leah Randazzo has an air about her that speaks of smoky 1940's nightclubs updated with a 1970's jazz/funk ethos. It's when Randazzo full embraces the older part of her jazz mix that she is at her most successful. Turn To Grey is a fine example, dialing down the sensuality a bit to deliver a purely outstanding vocal performance. Other highlights include Sweetness, Ain't It Funny and Morning Song; but Waiting For Alex is perhaps the virtuoso vocal performance of At The Root.

Leah Randazzo is a young performer with a big, seasoned voice. Listeners will be mesmerized by her sound, and At The Root will likely become a favorite of many readers who give it a chance. Now is the time to get on board the Randazzo train. Her shows are still small and accessible. Someday you can tell your kids as you hear her on the radio or get ready to go see a show at various stadia that you once saw her in 2008 or 2009 in a small club of 50 people. Don’t wait too long. The secret’s getting out. Leah Randazzo is on her way.

You can learn more about Leah Randazzo at www.myspace.com/leahrandazzogroup. You can purchase copies of At The Root at www.cdbaby.com/cd/randazzo.
Posted by Wildy at 5:10 AM