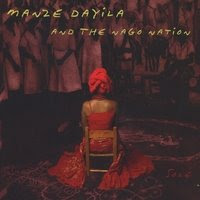 Manze Dayila And The Nago Nation – Solé
2008, AS IS Entertainment
Manze Dayila was one of the Haitian refugees to enter the United States via a rickety boat at Miami Beach in the first half of this decade. Her story is as complicated as it is lucky, as many of those who entered the US in this fashion were returned to Haiti almost immediately due to repatriation agreements between the two countries. Whatever legal maneuvering may have occurred, Dayila remains in the US as a sign of the sort of social, political and artistic impact immigrants have continued to have in the United States since its inception. Her debut album, Solé, mixes West African rhythms, Haitia Vodou (Voodoo) themes, reggae spirit and western pop sensibilities into a delightful musical patois that is a thrill to the ears.

Solé opens with Kwi, an eclectic West African pop tune. For my readers the closest association I can give you is Paul Simon ala Rhythm Of The Saints. The music is wonderful intricate and tuneful, and Manze Dayila has a hauntingly beautiful voice. Simbi D’Lo offers up an electronic vision of traditional Haitian music, including some very unique rhythm work. That Feeling is full of the sort of pop/world interplay that informed and infused many of the Peter Gabriel sponsored Real World recordings. This song could work in the pop/R&B realm as is. Bennchoumy Elian offers the rhymes on this track with a sound very reminiscent of French rapper Ste. I Want To Be Free is an uplifting R&B/West African hybrid again featuring Elian with real commercial potential. Other highlights include Papa Loko, Ibo, Solé and Ikonodub.

Manze Dayila is a very talented songwriter/performer with a top notch band behind her. In Solé she has created one of the more accessible and boundary pressing World albums I’ve heard in some time. The music on Solé will appeal to fans of World music, but is western enough in flavor to appeal to popular music fans who may not normally go there. Manze Dayila will hopefully continue making albums for some time to come.

You can learn more about Manze Dayila at www.myspace.com/manzedayila. You can purchase a copy of Solé at www.cdbaby.com/cd/manzedayila.
Posted by Wildy at 5:05 AM