Cantinero - Better For The Metaphor 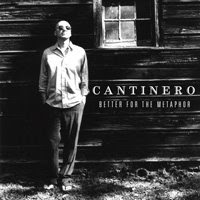 Cantinero - Better For The Metaphor
2008, C L Hicken and Tinkle

Chris "Cantinero" Hickens has seen the ups and downs of a music career. The Birmingham, England native first came to America as part of alt-rock band Bigmouth. Hickens spent some time after Bigmouth's breakup working as a bartender, earning the nickname Cantinero from a co-worker. In 2004 he returned to music with his solo debut, Championship Boxing, which made a splash on NPR an in Amazon.com's Top-40. 2008 finds Cantinero releasing his second album, Better For The Metaphor. Metaphor was recorded while holed up in New York State's serene Catskill Mountains. The new setting appears to have gotten Hicken's creative juices flowing in a major way.

Cantinero has a gift for melody layered over mellow arrangements that are lively while staying laid back. My House deals with provincialism, using one's house as a metaphor for all personal differences whether ideological, religious, cultural or otherwise. My House perfectly captures the conceipt with which humanity views their own station in comparison to others. Go-Getter is a seedy exploration of the "do-anything-to-get-ahead" mentality. Go-Getter could easily be the theme sound of the rumored sequel to the movie Wall Street. Safe is a lyric treatise on governance by fear.

The most striking thing about Cantinero's music is the intelligence and depth of the lyrics. In combination with the fluid, melodic music he writes, Cantinero's creations are just short of breathtaking. Rare is the songwriter who can mix such an aesthetic sense with such deep lyric poetry. Other highlights include Goodbye Life, Medicated, Selfish, Long Way Home and Stay In Bed. Stay In Bed has a Barenaked Ladies/Stephen Duffy feel to it that is frantic and melodic at the same time.

Cantinero is unique. It is highly unusual to find a songwriter so equally gifted in both composition and lyrics, but Chris Hickens is just that. Better For The Metaphor is a high appealing album with a high potential for commercial success. Cantinero is off to a good start as seven songs will be featured on NPR's Roadtrip Nation's 2008 Season (airing beginning October in both the US and Australia). Better For The Metaphor is required listening. Don't pass this one by.

You can learn more about Cantinero at http://www.cantinero.com/, where you can buy copies of both Better For The Metaphor and Championship Boxing. He’ll even sign them on request!
Posted by Wildy at 5:05 AM