Review: John Taglieri - Everything We Are 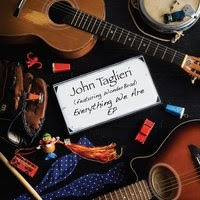 John Taglieri - Everything We Are
2008, Leap Dog Music

East Rutherford, New Jersey’s John Taglieri has built buzz the old fashioned way. He keeps putting out music and touring relentlessly. Along the way he’s earned the respect of industry pros, critics and fans alike. Taglieri’s fifth release, Everything We Are, is a revelatory statement about the power of pop music. This might be the one that vaults John Taglieri into the national consciousness.

John Taglieri opens Everything We Are with the title track. Everything We Are (A Toast) is a glorious pop/rock paean to friends, acquaintances and loves both present and future. It is a musical celebration of life and hope built within an absolutely infectious rock and roll shell. This is the sort of song that can capture public imagination on radio over a summer. At the very least most anyone who hears this song will find a time or place in their present or past life where it applies. It's purely optimistic and yet avoids cliche by being fresh and authentic. Taglieri continues the pop/rock perfection on Open Up To Me. If Taglieri had been making music in the mid-1980's when MTV was just starting he'd own his home state of New Jersey by now. Lonely Together is another pop rocker with extreme commercial punch. Taglieri's music isn't commercial by virtue of adhering to pop formulae so much as by being so bloody, infectiously good you can't get it out of your head.

Get You Back slows things down a bit for the requisite pop ballad. Taglieri sounds a little more prototypical here, and yet breaks the mold by avoiding lyrical sap in favor of optimistic pursuit of the object of his affection. John Taglieri cranks up the adrenaline a bit on Booty Call as the benefactor of a friend's calls who wishes for more than just the 3:00 AM calls. The song is sonically gorgeous with guitar work that if not complicated is tasty aural candy. The melody here is infectious to the point of contagion, and you will be humming this song for weeks. Living Without You goes for a slightly more stripped down sound and shows off Taglieri's voice against the sparse guitar/percussion opening verse. As always, the chorus is impossibly catchy and memorable, highlighting Taglieri's melodic and harmonic sensibilities in conjunction his seeming ability to always lay his fingers on the perfect hook. The bonus track Mac And Cheese has the same peppy/pop/rock sound that characterizes Taglieri's Everything We Are, in a pop confectionary ode to fake cheese powder and milk on elbow macaroni.

I'm a bit speechless, actually. John Taglieri displays a pop sense that is rare. He writes viable rock songs that are so contagiously fun you can't force them out of your head no matter how hard you try. Everything We Are is an absolute revelation and a reminder that you can make great pop music that's not inane and mindless. If Taglieri had come along at the start of MTV he'd own half the world right now. You don't want to miss out on this guy. No matter what the state of the music business he deserves a trip to the top. Everything We Are is a Wildy's World Certified Desert Island Disc. Check it out.
Rating: 5 Stars (Out of 5)

You can learn more about John Taglieri at http://www.johntaglieri.com/. You can purchase a copy of Everything We Are at www.cdbaby.com/taglieri5.
Posted by Wildy at 7:10 AM