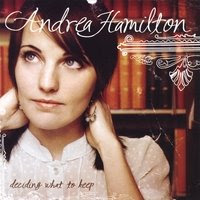 Kansas City native Andrea Hamilton moved herself to Los Angeles at the ripe old age of 18 to study music and pursue a musical career. Bringing with her an emotionally honest and positive songwriting style, she has never looked back In the time since she has recorded two studio albums and one live release, done half a dozen tours in the Western US, a handful of international dates, and has recently had one of her songs selected to appear in a documentary. Hamilton’s sophomore release, Deciding What To Keep, is a shot in the arm to a listing music industry.

Andrea Hamilton is like a bright, shiny penny you find in the street. She appears out of nowhere and is such a pleasant surprise you pick her up and take her home with you. Without pretense or affectation she offers up honest, open pop songs that will charm, touch and otherwise entertain you. Deciding What To Keep opens with Tonight It's Ours, a sweet song about the important things that people share. Busy is an anthem for Live Simply movement (See I've got a date with the ocean waves / I need to run through the park and play / Make up a dance and start dreaming / wake up believing that what life is really for / So I don't have time to be busy anymore). The tune is driven by quirky little piano hook and Hamilton's straightforward vocal style.

I'll Be Alright is a lovely ballad about loss and the strength to carry on. Lemonade sounds like something you might hear in a French Cabaret, and continues the positive outlook that Hamilton shows throughout Deciding What To Keep. With all of this positive, well-written pop material it can be hard to pick a standout track, but Only Love jumps ahead of the rest. Only Love is lyrically deep, melodically sweet and builds in tension and emotion like a love affair. Hamilton has the ability to build these little moments of pop perfection, and Only Love is the piece de resistance here.

Drop Everything And Run is one of several vaguely country flavored tracks on the album and again shows Hamilton's ability to craft highly memorable melodies couched in well-wrung arrangements. Incisive lyrics and a gift with the occasional turn of phrase make this a gem. Other highlights include Let It Go, the 1980's top-40 sounding How Do I Get To You, Truth Get Your Boots On and the exquisitely beautiful Don't Let Go.

Andrea Hamilton isn't so much an Americana artist as one who hasn't fully committed to pop or country. Let's hope she stays as ambiguous in the future. Hamilton displays an ability to craft beautiful, highly positive songs that embrace life and living. It's refreshing to hear the open, clear voice of a newcomer in a pop world grown cynical by success. Hamilton doesn't overreach or try to do too much in her songs. She just manages to capture perfect moments almost perfectly. What more can you ask for? Deciding What To Keep is an absolute GEM; a Wildy's World Certified Desert Island Disc, and hopefully the first of many more recordings Andrea Hamilton graces us with in the years to come.

You can learn more about Andrea Hamilton at http://www.andreahamiltononline.com/ or www.myspace.com/andreahamiltonmusic. You can pick up a copy of Deciding What To Keep at www.cdbaby.com/cd/andreahamilton3.
Posted by Wildy at 5:10 AM