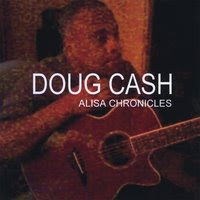 Sacramento’s Doug Cash is enigmatic in presentation. He displays what appears to be a talent or touch for great pop tunes (Snowed) and a unique sound that mixes pop, reggae, Latin and folk styles. Lyrically Cash is a bit of a challenge for the listener. The lyrical content on Alisa Chronicles is simplistic and repetitive, the sort of bubblegum one might expect on a dance record. Songs such as Boy Crazy become cloying, and Manuel is cute in a novelty record sense. To Be Average has some good harmony work to it and start out well, but collapses under the weight of its own self-aggrandizing tone. Occupational Hazard is a bright spot here, written in an almost old-time Gospel style.

Alisa 2 has some of the best guitar work on the album, including some complicated runs and harmonics. It may also be the best written song on the album. Highfall is a clever acoustic bundle that shows off Cash's voice to full effect. Cash's voice is worthy of note, an extremely pleasant tenor that stands out more and more as the instrumentation strips away. The album closes out with Loneliest With You. The song is a bit awkward at times but poignantly talks about a past relationship that was both the most exciting and least fulfilling.

Doug Cash has real potential as a songwriter. There are moments on Alisa Chronicles where he approaches his potential, only to get sidetracked by what be a tendency to play around with things a little too much. My impression is that Cash is a writer who is constantly tweaking his compositions to get the perfect sound, and while this can have merits it can also be overdone. Alisa Chronicles is bright and airy and will definitely find some fans in the coffeehouse set, but probably isn't quite ready from prime time.
Rating: 2.5 Stars (Out of 5)

You can learn more about Doug Cash at www.myspace.com/dougcash. You can purchase a copy of Alisa Chronicles at www.cdbaby.com/cd/dougcash12.
Posted by Wildy at 5:00 AM