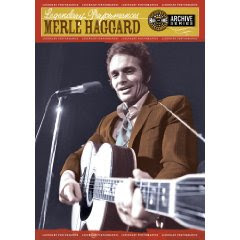 Merle Haggard is a legend. Not your garden variety legend. Regardless of how brutally honest he’s been about his own life over the years, there’s a mythology that follows him like mist after breath on a cold morning. Haggard was in and out of detention centers/prison in his teens and early 20’s. He was at several of Johnny Cash’s San Quentin concerts as a mandatory guest due to a robbery gone bad. Cash’s inspiration plus exposure to inmates who would later be executed convinced Haggard to straighten his life out, and within a couple of years of his release Haggard was ascending the country music charts in the United States. Haggard remains revered even today for an outlaw streak that helped to revolutionize country music. The Bakersfield (California) sound, which Haggard helped introduce (along with artists such as Buck Owens) was alt-country’s answer to the over-produced honky-tonk then in vogue in Nashville.

Haggard was on to something. Between 1966 and 1987 Haggard racked 38 #1 hits, 4 Grammy Awards, 15 Academy Of Country Music Awards, and 6 Country Music Awards. Haggard was elected to the Nashville Songwriters Hall Of Fame in 1977 and to the Country Music Hall Of Fame in 1994. There will always be artists who try emulate Haggard’s style or his sound or his outlaw stature, but there will never be another Merle Haggard. Shout! Factory offers up a collection of 15 of Haggard’s most riveting performances from the heart of his career (1968 – 1983) entitled Legendary Performances.

Legendary Performances includes offerings from Country Music Holiday; Billy Walker’s Country Carnival; the Porter Wagoner Show; Pop! Goes The Country; the CMA Awards and an iconic performance of San Antonio Rose from Johnny Cash’s 1983 Christmas Special. Highlights include Mama Tried; The Fightin’ Side Of Me, Okie From Muskogee; Workin’ Man Blues and That’s The Way Love Goes. Truth to tell, there’s not a throwaway pick on the DVD. Haggard fans old and new will love this, and it’s refreshing to see an all-around performer in action. Many of the current denizens of Nashville stand to learn a lot from a guy like Haggard.

Rounding out what is already a musically gratifying experience are two superb extras. The first is an interview with Merle Haggard from 1981 that fans will love, and the second is his 1994 induction into the Country Music Hall of Fame. Shout! Factory did this one right. Hardcore fans will of course complain about their favorite song that was omitted from the collection (38 #1 hits plus an amazing deep catalog exist here), but for a basic best of collection that features some iconic performances, it doesn’t get much better short of doing a whole box set. Legendary Performances is aptly named!

You can learn more about Merle Haggard at http://www.merlehaggard.com/. You can purchase Legendary Performances at Amazon.com or wherever music/music videos are sold.
Posted by Wildy at 5:00 AM