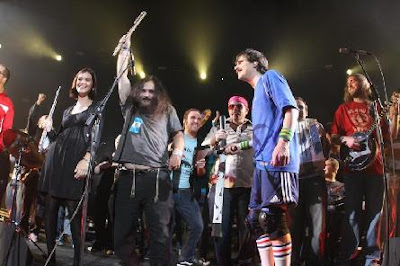 Steve Lieberman is an artist who lives with Bi-Polar Disorder, an obsessive adoration for Jethro Tull and a very unusual view of the world. Lieberman’s brand of psychedelic rock is the emotive and logical overrun from a square peg trying to interface with the round holes of society. Steve Lieberman has been very prolific, producing 2-3 albums a year since 2002. We’re not sure how many albums Lieberman’s made, and we don’t know if Leiberman himself is sure, but there are at least a dozen for sale on his website. Lieberman’s latest (purportedly his 15th), Overthrow The Government, rocks out with its tzitzis out.

One of the most wonderful (and frightening) things about any Steve Lieberman recording is that there are absolutely no filters whatsoever. Lieberman pours whatever he thinks into his songs without care. His songs are at times hysterically funny, blatantly in your face and even mildly disturbing, often all at once. Lieberman revels in his own controversy, appearing happy to stir up the establishment in the vein of some of the great counterculture artists of the past (Andy Warhol, Holden Caufield, George Carlin). Lieberman is at his most entertaining when aiming for humor (Beyonce’s Beaver, Dinosaur Rockers May Have E.D., Famous When I’m Dead, I Wrote This Song 2 Days Ago). I’m Jethro Tull even has some of this spirit, although from listening to Lieberman over time I know Lieberman has a great love for Ian Anderson/Jethro Tull, so this song is more tribute than anything.

Lieberman does veer into the bizarre/disturbing on songs such as Radio Suicidal, People Who Died, I Wanna Be An Alcoholic and I’ll Overthrow The Government For You. These songs cross over into the area of “he’s still being funny, right?” Like I said previously, no filters.

Steve Lieberman upholds the long tradition of American Counterculture artists. He’ll shock you, make you laugh, and on occasion even touch you. He’s making music for himself, and he wants to be liked and listened to, but he’s not afraid to anger or offend his listeners. It’s as if he’s not so much concerned with what you think of his music. That you think about it is sufficient. Overthrow The Government is funny and disturbing, irreverent and at times manically serene. Just like the man.
Rating: 3.5 Stars (Out of 5)

You can learn more about Steve Lieberman at http://www.gangstarabbi.com/. While there you can purchase a copy of Overthrow The Government as well as many other fine recordings. We’re not promising you won’t end up on a government watch list for going there, but the site is very entertaining.
Posted by Wildy at 5:07 AM