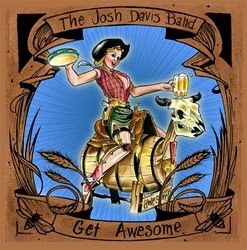 The Josh Davis Band hail from Des Moines, IA, and bring with them some of the Midwest sensibility that Iowa is known for. Straightforward rock and roll with a bit of country twang is the rule here. The Josh Davis Band’s third album, Get Awesome, marks some changes for the band. New personnel and a new focus are in evidence, as the band seems to get their feet under them and are all moving in tandem in one direction for perhaps the first time. The results are positive.

Josh Davis has some good old rock and roll spirit running through his veins. Big guitar sound and bigger choruses wrap around lyrics about classic rocker themes. Coal Black Heart is a prime example, extolling the talents of a particular woman in contrast to her ruthless side. Tamborine Girl is similar, painting an aural picture of the sort of free spirit who always shows up at concerts (usually standing right in front of you). Messages From Mars slows things down a bit with an introspective song that after numerous listens I still haven't been able to figure out what its about.

For The Last Time Liza is a memorable tune; it’s an acoustic drop out that may be the best written song on the album. It becomes quite apparent that The Josh Davis Band really finds their footing in this stripped down setting. Other highlights include My, My Mary; Pocket Rocket and June.

The Josh Davis Band appears to embody some real songwriting and performance talent. When rocking out or when stripped down JDB finds real energy and essence in their music, communicating an authentic working class rock and roll mystique. Davis and band do get a little bogged down on the slower songs at times, like perhaps the focus just isn't there at times on the slower stuff. All in all, Get Awesome is an excellent offering. It's the sort of album that will be a long-term irregular play for most readers. Good enough to be memorable and desired listening, but perhaps not quite a staple.

You can learn more about The Josh Davis Band at http://www.thejoshdavisband.com/. You can purchase a copy of Get Awesome from the Authentic Records website.
Posted by Wildy at 5:05 AM