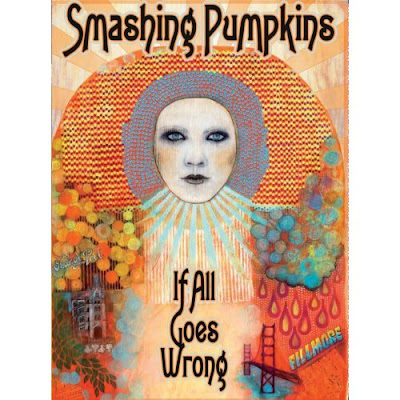 I really don’t need to tell you much about Smashing Pumpkins. Billy Corrigan and crew filled the post-grunge void in the 1990’s with intelligent art-rock that has helped to define a generation of alt-rock musical sound. The band’s breakup several years ago was an emotionally devastating experience to hard core fans. Their subsequent reunion was a jubilant one. If All Goes Wrong, available November 11, 2008, chronicles a residency at The Fillmore in San Francisco, including a documentary, a fan featurette entitled “Voices Of The Ghost Children” and an interview with Pete Townshend of The Who.

Clocking in at 4 hours and 31 minutes, this 2-DVD set is everything Smashing Pumpkins’ fans could have asked for and more. The Fillmore Residency Concert (most of Disc Two) is vintage Smashing Pumpkins, right down to the devastating take on Zeitgeist. The concert also features five previously unreleased tracks (Peace+Love; 99 Floors; Untitled; No Surrender and Gossamer). A bonus on disc two features five songs from a Fillmore rehearsal on July 27, 2007 with two more previously unreleased tracks (Mama and Promise Me). If this was the whole package fans would be happy, but Disc One features a documentary on the making of If All Goes Wrong; the above mentioned featurette and the odd interview with Townshend.

I should mention that this collection is not for casual fans. Several of the songs here have been reworked from their original forms. Many of the songs in concert are stripped down/acoustic, and Gossamer becomes a jam that lasts for better than twenty-five minutes (without every losing it’s energy). This is just the sort of post-artistic exclamation point you’d expect from Smashing Pumpkins.

Smashing Pumpkins will always have a rabid and vibrant following. If All Goes Wrong is the truest testament as to why one could offer. As concert films go this is the cream of the crop. If your interest goes deeper than Bullet With Butterfly Wings, than this collection is for you. And if you’ve heard about them for years but never checked out the Pumpkins, start here.
Rating: 5 Stars (Out of 5)

You can learn more about Smashing Pumpkins at http://www.smashingpumpkins.com/. You can purchase If All Goes Wrong at Amazon.com or wherever music is sold.
Posted by Wildy at 7:18 AM