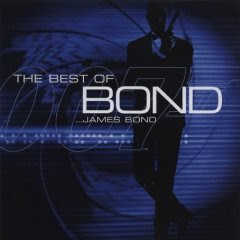 Various Artists – The Best Of Bond… James Bond
2008, Capitol/EMI Records
In the world of movies, they are a vast list of sequels and series. Series like Star Wars, Indiana Jones and Harry Potter all have explosive box office sales and rabid fan bases, but none of them has the longevity of the SIS (MI6) Commander. Bond has graced the silver screen 22 times (including 2008’s Quantum Of Solace). Bond is the creation of British journalist Ian Fleming, and has been the subject of several authors over time (Fleming passed away in 1964). Over the course of 22 movies (and 22 soundtracks), the James Bond line has developed a significant number of songs identified with various movies. The Best Of Bond… James Bond is an attempt to cull the best, or at least most recognizable of those songs into one collection.

The Best Of Bond… James Bond is not just a retrospective, but also something of a sociological study of the changes in popular music over the last 40+ years. The CD features artists as diverse as Shirley Bassey, Louis Armstrong, Chris Cornell, Paul McCartney, Duran Duran and Sheryl Crow (just to name a few). Many of these songs have been popular hits over the years, and most music fans will recognize much of the material presented here. Highlights include Duran Duran’s A View To A Kill, McCartney’s Live And Let Die, Bassey’s Goldfinger and two selections from John Barry Orchestra: the James Bond Theme and On Her Majesty’s Secret Service. You could pick most any song from the CD and substitute it in for one of the ones above. This is the cream of the crop from the 21 previous films, so there is much material to choose from.

James Bond is an enduring as the art of making movies. It’s hard to imagine the franchise ever going away. Each new generation rediscovers Bond and aside from one or two movies along the way, Bond never seems to lose steam. The Best Of Bond… James Bond is a worthy testament to the staying power of Agent 007. Music fans of all ages and ilks will find something to love here. Bond fans will eat this up.

You can learn more about James Bond at http://www.007.com/. You can purchase a copy of The Best Of Bond… James Bond at Amazon.com.
Posted by Wildy at 6:19 AM