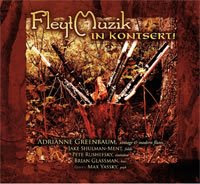 Adrianne Greenbaum and FleyMuzik are bringing Klezmer music back to it's European Roots. Wooden flute, hammered dulcimer and percussion are the prime elements here, providing a sound that's more reminiscent of 18th Century Europe than much of the Klezmer played today. The album has a Gypsy music feel to it that recalls its Middle-Eastern roots. FleytMuzik: In Kontsert! is a collection of 31 lives songs that will cut right to heart of history.

Adrianne Greenbaum is a master on the flute, renowned in both Classical and Klezmer circles. In Kontserti is her Master Class, providing both music fans and musicians with aural food for thought. The CD opens with Sher and an opportunity for Greenbaum to show off her virtuoso flute play leading into a lilting tune that sounds almost more like an Irish Jig than anything else. Dobridyen is full of melancholy sadness and speaks of generations of suffering. Freylekhs is a frantic run, almost sounding like a chase. Other highlights include Khosidi, Rivkele's Hora, Old People's Dance, Hangul and Rumanian Sirba.

Adrianne Greenbaum speaks to the heart of European-Jewish musical tradition. Klezmer as it was played several hundred years ago is alive and well here. FleytMuzik: In Kontsert! is a musical time-trip that is well worth the venture.

You can learn more about FleytMuzik and Adrianne Greenbaum at http://www.klezmerflute.com/. You can purchase a copy of FleytMuzik: In Kontsert! at www.cdbaby.com/cd/greenbaum3.
Posted by Wildy at 5:00 AM