Review: Anis Hoffman - The Name Of This Album Is Self-Titled 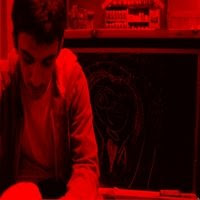 Anis Hoffman – The Name Of This Album Is Self-Titled
2008, Anis Hoffman

Greensboro, NC native Anis Hoffman currently bases himself out of Boston, with a sound reminiscent of the 1960’s folk icons. Teaching himself to play guitar starting at the age of 15, the nineteen year old has developed quickly into a singer/songwriter with great potential. Hoffman’s debut CD, The Name Of This Album Is Self-Titled shows his youth at times, particularly lyrically, but illustrates a talented artist and songwriter rounding the last corner of youthful awkwardness into awakening.

Opening with Patriot Game, Hoffman comes off as a poor man's Bob Dylan. There is something to his style and sound that is reminiscent of Dylan’s but lyrically Hoffman comports himself as a young songwriter. What Hoffman has in the sense of an authentic sound gets somewhat muddled in a lyric awkwardness that may be part affectation but generally jars the listener in an uncomfortable fashion. All I Want comes across as something of a manic rant where stream of consciousness overcomes cogent thought. Bisbo sounds (musically) like something you might hear at the back of the Indigo Girls bus, but the lyrical ham-footedness of Hoffman turns this into a long listen.

Hoffman turns the corner on Another Moment Of Your Life, showing the potential he has as a songwriter and performer. Eraserhead maintains this new chutzpah that elevates Hoffman's rants into the rarified air of great songwriting. Unfortunately things generally fall apart from there. So Much Time shows some presence, but the rest of the album gets mired in sophomoric lyricism mixed with an overly expansive sense of the rhythm of a song.

Anis Hoffman has real potential. There are two or three tracks here that show how talented Hoffman is. If he learns to discipline that talent, to sharpen the focus of his songwriter's pen down to a narrow point he may achieve great success. For now he is entertaining and carries with him that air of what might be. The Name Of This Album Is Self-Titled is a worthy study of the artist and definitely worth a listen.
Rating: 2.5 Stars (Out of 5)

You can learn more about Anis Hoffman at www.myspace.com/anishoffman. You can purchase a copy of The Name Of This Album Is Self-Titled at www.cdbaby.com/cd/anishoffman.
Posted by Wildy at 5:33 AM