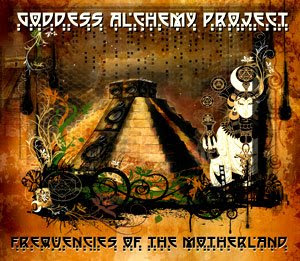 Frequencies Of The Motherland opens with Genisis, a Delirium-esque meditation on the Metaphysics of the Goddess Alchemy Project. The presentation is not so much being versus becoming as it is transcendence, mixing spoken word, singing and effects over an ambient track with rhythms that simulate a single heartbeat growing into a sparse electronic loop. It's pagan rave at its finest. Secrets starts out in the same place but moves into a mild hip-hop patois. The transition to hip-hop continues on Groundbreak Kin. Goddess Alchemy Project thoroughly abandons ambient for hard core rap styles for much of Frequencies Of The Motherland. In the end Goddess Alchemy Project ends up much more like an urban Wilson Phillips or an earthy En Vogue than anything else.

Make sure to check out L.O.V.E., one of the more musical compositions on Frequencies Of The Motherland. L.O.V.E. has a catchy melody and great minor key harmonies. Other highlights are Diasporie Footprints and Transcendent Realms. The rest of the album left me a little lost. Goddess Alchemy Project is something of an artists collective, but Frequencies Of The Motherland comes across as a highly commercial attempt at musical ideology rather than art. There is some novelty here, but it doesn't carry the album, and despite some bright spots, the album just doesn't live up to expectations.
Goddess Alchemy Project is an interesting ensemble with some real potential. The vocalists here are above average and harmonize very well together. The reliance on repetitive music tracks and limited melodic reach make this recording sound somewhat canned, or at the very least produced to reach for radio exposure. All this manipulation seems to hide (and quite possibly impede) what may otherwise be a very vibrant project. Goddess Alchemy Project seems to find more musical footing on the ambient side of their musical heritage than on the hip-hop side. Frequencies Of The Motherland will find ears among hip-hop fans, ambient/electro fans or some followers of pagan philosophies/religions. I don't see this disc having a wide reach however.

You can learn more about Goddess Alchemy Project or buy copies of Frequencies Of The Motherland at http://www.goddessalchemyproject.com/.
Posted by Wildy at 5:05 AM