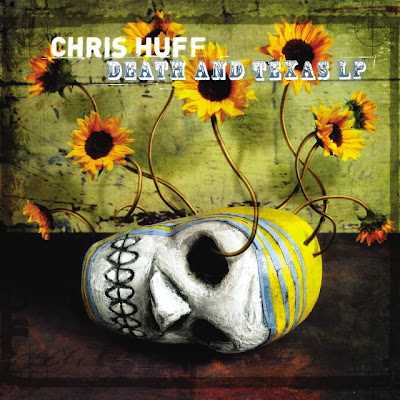 Chris Huff speaks/plays a musical patois that is unique in popular culture. He's played/sung classical piano, jazz bass, folk and rock guitar, a cappella, opera, gospel, bluegrass... you name it; he's done it. And it's all here. Death And Texas is the ultimate "gumbo", where styles blend and fold into one another until the differentiated ingredients give up their respective identities to some new musical identify that has yet to acquire a name.

Listening to the opening track, Hey Now Now, I couldn’t get the vocal similarities between Chris Huff and Peter Gabriel out of my head. Huff could be mistaken for Gabriel on the virtue of his voice. Granted Gabriel has never been known to play Matthew Wilder style pop-reggae, but it could happen. Huff sets us straight on Oceans Never Freeze, taking us on tour of his eclectic musical mind. The song veers from big Max Webster style alt-punk to classic rock opus with some Beach Boys harmonies and New Music dissonance thrown in for good measure. Ghosts Of The Past and Lost In The Mausoleum continue the disintegration into post-modern sound. Each song starts with clear melody and slowly devolves to the point of sounds overlaying one another at random.

My personal favorite here is For The Trees, a dark and dirty blues/reggae hybrid. While For The Trees generally avoids the sonic cavalcade of sounds that become some of its countrymen, the Lo-Fi sound here is a perfect complement to the song itself. Neighborhood (Ain’t It Time) harkens back to the 1960’s as a strong period song. Then We’re Dead is fun little punker where Huff sounds vaguely like Ian Anderson on vocals. The album closes out with The Cause, which may be the most well-written song on the CD.

Chris Huff has some interesting divergences on his way to becoming a good songwriter. He has a strong sense of melody and song construction but is also enamored with musical deconstructionism a bit. Death And Texas is a fun listen; at times confounding, but ultimately worth the trip.
Rating: 3.5 Stars (Out of 5)

You can learn more about Chris Huff at http://www.huffmusic.com/, where you can purchase a copy of Death And Texas.
Posted by Wildy at 5:00 AM