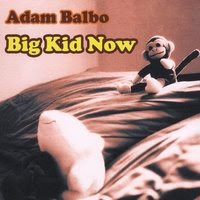 Adam Balbo made his way to San Francisco from Indiana via Beijing. You’ll have to ask him. Along the way he learned a lot about frying cheese, placing grand inductions and observations about life into his lyrics, and writing very cool modern folk-rock songs that are as reminiscent of Bob Dylan as anyone else I can think of. Balbo’s latest EP, Big Kid Now, is six songs of tongue-in-cheek post-pop culture reflections and winking hints at truth. Weaving his reflections and intuitions into his music like Warhol on canvas, Adam Balbo writes songs from his ID to yours starring acoustic guitar, the occasional Casio keyboard and Balbo’s eclectic voice.

Big Kid Now opens with the title track, a seemingly tongue-in-cheek of skills that seem to mark adulthood in our current culture and how empty many of them are. The song drips with an understated irony that is palpable and yet subtle enough to deliver its message without offense. The Snakeman is a brief treatise on I know not what, but it was highly entertaining. Monkey Goes To Breakfast opens with a keyboard part that sounds like it may be funeral music, and seems to be about the barriers that exist in human communication.

16-Bar Blues Love Song sounds like the sort of rant that might coincide with a good case of the munchies. The lyrics don’t necessarily make a lot of sense, but again are highly entertaining. Note To Self is perhaps the most interesting tune here. Even with Balbo’s brand of off-kilter lyricism, this is the closest thing to a (slow, melancholic) pop song on Big Kid Now. There is a deranged sensibility here (and Teddy Ruxpin reference) but the melody is actually quite lovely. It’s almost Pink Floyd like in its obtuse beauty. The EP closes out with Stain On My Shirt, what appears to be a musical metaphor for the sort of small social stigma that people use to feel superior in their day-to-day lives, and how little this all means. Perhaps I am reading too much into this one, but it’s a bit of genius.

Adam Balbo surprised me. I really didn’t like this CD on first listen, but it grew on me. I have a feeling that this disc has highly addictive properties that may need to be regulated in the long run. Big Kid Now is the sort of CD you almost laugh off until you find it has quietly overtaken your CD player and you’re listening to it relentlessly. I mentioned earlier that Balbo has a lot in common with Bob Dylan. Dylan was counterculture, but Adam Balbo travels at right angles to reality. He touches on reality once in a while on his way to the glorious madness he documents in his songs. The madness is us.

You can learn more about Adam Balbo at www.myspace.com/adambalbo. You purchase a copy of Big Kid Now at www.cdbaby.com/cd/adambalbo2.
Posted by Wildy at 6:20 AM