Review: Julie - An Act Of Communication 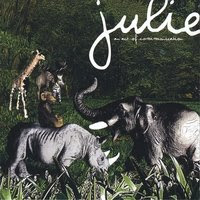 Los Angeles based Indie-Rock band Julie makes music so fresh and authentic you'll do a double take. Julie is the long term culmination of a friendship between front man Ethan Blumenfeld-James and guitarist Dustin Bath that dates back to their high school days. Originally a drummer, Blumenfeld-James stepped out in front with the addition of Mark Milan, Jon Spence and Adam Alessi. The band has never looked back as they have discovered a chemistry that borders on musical alchemy. Their debut CD, An Act Of Communication, commits to the permanent record a sound that has wowed crowds in LA and promises to take Julie far beyond the confines of The City Of Angels.

An Act Of Communication opens with LA Kids, a vaguely Prog sounding anthem that is very catchy and very radio ready. Do Si Do is post-punk pop/prog mix that sounds like a Spacehog cover. You won't be able to sit still while this song is playing. Lead vocalist Blumenfield-James doesn't sound like Freddie Mercury, per se, but he has some of the same vocal personality. Julie slows things down a bit with Through Your Mind's Eye, a big Progressive sounding ballad that is more romantic nature than about romance.

One of my favorite songs on An Act Of Communication is Learn To Crawl. It has some funky instrumentation, intelligent lyrics, and a big stadium aura to it. Foggin' Up A Clear View continues down the path of quasi-symphonic Progressive rock yet manages to sound very modern. Be sure also to check out Lonely Streets, which has a very strong pop/rock element to it. I Couldn't Imagine takes an interesting turn for Julie, coming off as a big time Country/rock tune with some R&B roots. The song sways its way right into your head and won't leave. Other highlights include Un-Tongue-Tied; The Queen-like Long Way Down; Sippin' On Moonbeams and the eerily dead on cover of The Beatles Blackbird. My favorite tune on An Act Of Communication is Restless Hearts. This returns Julie to the territory as bands such as Spacehog, but has a strong pop sensibility and a highly memorable melody.

Julie is one of the more enigmatic bands I've come across this year. They march very much to their own drummer; big Prog song construction mixing elements of jazz, ska and country at times into a sound that is difficult to classify and even harder to put down. An Act Of Communication is the sort of album that will hook some new fans, and put a few potential fans off. It's eclectic and off the beaten path, but has enough touchstones there to have a real shot at big things. And the losses will be far outweighed by the new fans. An Act Of Communication is an incredibly brave, daring, outrageous and glorious album. A Wildy's World Certified Desert Island Disc for certain. Get your copy sooner rather than later.

You can learn more about Julie at http://www.julietheband.com/. You can purchase a copy of An Act Of Communication at www.cdbaby.com/cd/julietheband2.
Posted by Wildy at 6:03 AM