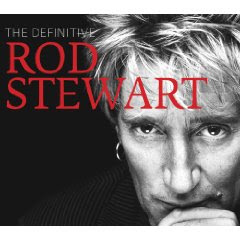 Rod Stewart. There aren't many names bigger in rock and roll. From his early days with The Jeff Beck Group and The Faces to his long-standing solo career, most everything Stewart has touched has turned to Gold (sometimes Platinum). Rod Stewart is a two-time Hall of Famer, inducted into the Rock And Roll Hall Of Fame in 1994 and the UK Music Hall Of Fame in 2006. With sixty-two (62) hit singles, including twenty-four (24) in the top ten and six (6) number ones, Stewart has spent a good part of his life on the pop charts. Stewart was also recognized by the World Music Awards in 2001 with its Diamond Award, indicating over 100 million records sold. It's not surprise that any greatest hits package would need multiple discs to properly represent Stewart's career. The Definitive Collection boasts two (2) CDs and thirty-one (31) of Stewarts biggest hits. It's a bargain but will leave hard core fans wanting.

Don't get me wrong. All of the hits are here. The Definitive Collection chronicles Stewart's career from the perspective of a life-long radio listener might know it. This is for fans, casual fans and newcomers who might like to get to know Rod Stewart a little. If you have all of Stewart's albums you won't find anything new here, but the sonic treatment provided to (especially) the older tracks might make it worthwhile anyway.
The set opens with Maggie May, perhaps the most iconic of Stewart's hits. Also included are such classics as You Wear It Well, Sailing, You're In My Heart, Young Turks, Tonight's The Night, Some Guys Have All The Luck, Forever Young, Downtown Train and Do Ya Think I'm Sexy. Throw in unplugged/live versions of Have I Told You Lately (That I Love You) and Reason To Believe and the previously unreleased Two Shades Of Blue and you have an incredible collection that will please fans old and new.

Rod Stewart's The Definitive Collection isn't really definitive. There is so much more great material in his catalog that could have been included in such a title. Nevertheless, this is probably one of the best balances of content and value you'll find anywhere this year. Stewart's legion of fans still goes crazy when he takes the stage. Years of performing have added an extra rasp to his voice and he's not as wild on stage as he once was, but he still has charisma to sell a song that is almost unrivaled in popular music. This is a great way to get to know Stewart's material, or a great reminiscence for a longtime fan!

You can learn more about Rod Stewart at http://www.rodstewart.com/. You can purchase a copy of The Definitive Collection at Amazon.com or wherever music is sold.
Posted by Wildy at 5:05 AM