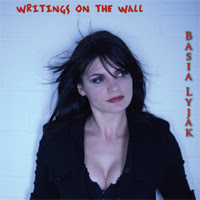 Toronto’s Basia Lyjak is on the rise. Starting out as a member of the short-lived pop band Aphrodisia, Lyjak quickly broke out on her own. Not fitting into the pop princess mold, Lyjak sings from the heart and from the gut. On CD you hear just Basia Lyjak, without computer enhancement or pitch correction. Her second EP, Writings On The Wall, sets the tone for a long career with songs full of passion and chutzpah. There’s no holding back.

Lyjak opens with the wonderful frenetic Stuttering. A strong punk rock sensibility turns into a big rock chorus that's part Lita Ford and part Debbie Harry. Lyjak has that slightly pouty rocker girl sound that was popular amongst the queens of 1980's rock/metal. Her voice is quite a pleasant listen, in fact, with just enough edge to make her believable as a rocker. Bye Bye is a low key modern rock song with a big chorus that allows Lyjak to spread her wings somewhat. This is a highly commercial tune that should do very well on radio and in licensing. Plastic lets Lyjal open up her pipes and let us know what she's really made of. The results are tremendous, as Lyjak at full volume is a real treat to listen to. There's an almost Idina Menzel quality to her.

Torn is a pleasant rock song, but a little too much like most of the other modern rock you might hear on the radio to stand out. The EP closes out with Lies, a slowed down rocker that doesn't really pick up the sort of energy displayed on the first three songs until the chorus. The song is full of angst but doesn't seem to every quite get out of its own way with regard to energy level.

Basia Lyjak is quite a talent. Her big, strong voice can blow you away but is supple enough to handle soft passages without any difficulty. Writings On The Wall is a smash for the first three songs, and just okay for the last two. Not a bad ratio, in fact. I recommend Writings On The Wall to my listeners as a great starting point for an artist, and a good to great listen.
Rating: 3.5 Stars (Out of 5)

You can learn more about Basia Lyjak at http://www.basialyjak.com/, where you can purchase a copy of Writings On The Wall.
Posted by Wildy at 5:00 AM