Yikes! Today we're down to the #4 ranked album of 2008. Just three more days until #1, and then it's a new year and we start all over again! 537 albums were eligible for consideration for this list in 2008, which means we're in the top 1% of all submissions now! Remember that you can learn more about the release by clicking on the link embedded in the artist name/title. This will take you to the original Wildy's World review, which includes website information for the artist as well as purchase information. 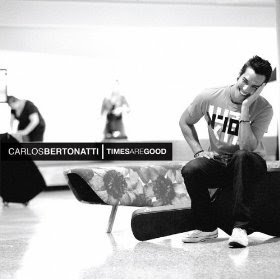 #4 Carlos Bertonatti - Times Are Good
At the point when we received Carlos Bertonatti's CD Times Are Good, it was months away from being commercially available. What we had was a rough mix burnt to a CD by his publicist trying to drum up some early interest. We had no idea what a gem we had come across until we actually sat down to listen to it the first time. Carlos Bertonatti writes some of the most sublime pop songs out there. The songs on Times Are Good are acoustic, and so are pop without all of the noise and effects that tend to accompany pop music. With Latin and Soul having their influence on his sound, Bertonatti is a marketer's dream. The fact that the songwriting is incredible is a bonus in the business, but for here we're all about the songwriting and performing. Carlos Bertonatti is an electric personality. Check out his fan base and you'll see the sort of near-manic devotion that super stardom is made of. His songs are first class, and his voice and looks will be sure to make the ladies swoon. All of that aside, it's probably the best pop album of 2008.
Posted by Wildy at 6:00 AM