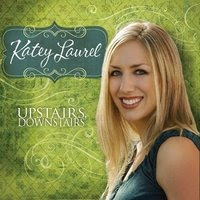 If you ask Katey Laurel what style of music she plays, she’s most likely to respond Folk-pop. This is the “genre” that has encompassed artists such as Jewel, Ingrid Michaelson, Sufjan Stevens, and an empire of artists who write acoustic based pop songs that fit neatly into the marketing niches of prime-time television soundtracks. There is a broad continuum of quality in this burgeoning class of musicians that runs from pop-fluff gone acoustic to good, classic singer-songwriter fare. I am happy to tell you that Katey Laurel fits solidly into the latter category. Upstairs, Downstairs, her fourth album on Roaring Twenties Records, makes you think how a Carly Simon or Joni Mitchell might have sounded if they were starting out today.

Upstairs, Downstairs opens with Twentysomething, a tribute to learning to stand on your own. The song has a peppy feel in spite of the wistfully melancholy lyrics. Angels In The Attic has a dark and dreamy aspect and guitar part a-la Andy Summers on Don't Stand Close To Me. Katey Laurel really lets herself go on Angels In The Attic, the depth and timbre of her voice shining out of the chorus like a dark star full of textured beauty and heavy substance. It's a voice that that can range from pretty to gritty, from serene to sexy, all in the turn of a phrase. Earthquake follows as the epitaph to a relationship, projecting a vulnerability that's both guarded and palpable.

You tells the classic tale of the relationship you don't want to keep but can't stand to let go. It's social dysfunction at its musical highest. No One Else is destined by licensed, included in mix tapes, sung to significant others and otherwise spread about the earth in by haphazard means. The melody is a classic one and the message is one that people will latch onto as undeniable truth. Laurel has hit on a special song here. Waiting, likewise is a special song. There's a smoky wanton quality to this song that is part desperation and part desire. Laurel's voice is perfect here, dripping with need. As good as everything else here is, Katey Laurel hits a peak on Spiral-Bound Notebook, perhaps one of the most moving unrequited love songs of 2008. The narrator pours her heart into the notebook but can't bring the words out to her beloved. It's heart-breakingly beautiful and an absolute must hear. Be sure to check out See-Through and Something To Believe In, both worthwhile listens.

Katey Laurel is an extremely gifted songwriter. Laurel's voice shows flashes of Joni Mitchell and Natalie Merchant, but her sound is very much her own. The deep warmth and sensuality of her voice will surprise listeners and reach beyond their defenses to their hearts and minds. That's Katey Laurel's greatest gift, the ability to connect with listeners even through the cold medium of a CD or download. Upstairs, Downstairs is a fantastic album, and hopefully one of many albums to come.
Rating: 4.5 Stars (Out of 5)

You can learn more about Katey Laurel at http://www.kateylaurel.com/, where you can purchase a copy of Upstairs, Downstairs using PayPal. If you don’t have PayPal, you can pick up a copy at www.cdbaby.com/cd/klsmith4.
Posted by Wildy at 5:00 AM