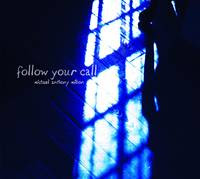 Michael Anthony Milton is the president of Reformed Theological Seminary in Charlotte, North Carolina. He has published eleven books on faith, including the autobiographical What God Starts, God Completes. He's been published in periodicals such as Crosswalk, Christianity.com and The Christian Observer. He's also been described by Michael Card ("El Shaddai") as "a shepherd leading his flock with song." Milton uses a mix of bluegrass, folk and Eagles-style country/pop to forward stories of faith and renewal on his debut CD, Follow Your Call. Regardless of your sentiments on the message, you're likely to find the music captivating.

Michael Anthony Milton might be described as the Dan Fogelberg of Contemporary Christian Music. His voice is clear and pleasant and floats over the music. His compositions are primarily acoustic with folk or country embellishments Follow Your Call opens with Carolina Free, a song that would sound perfectly at home on late 1970's or early 1980's AM radio. Still My Little Child is a touching song about acceptance and love from the perspective of God. Make no mistake, the eleven songs on Follow Your Call are distinctly Christian, and if that's not your thing then you won't appreciate this album. Yet the quality of the songwriting, irrespective of the message, is intensely wonderful. Milton is a first class songwriter regardless of whether you agree with his message. Musicians will appreciate this effort immensely.

Be sure to check out What God Starts, which sounds like it might have come off a James Taylor album. Genealogy is one of my favorite songs on the album, defining the importance of knowing one's family tree. Pastor's Wife is a loving tribute to Milton's wife Mae, and speaks to the strength that every husband draws from his wife. Other highlights include Follow Your Call, No Response At All and Chapel On The Prairie.

Follow Your Call is a distinctly Christian album, but it's also a musician's and songwriter's album. If the message of the album isn't one you cotton to, you may still find enjoyment in the song craft and musicianship. For those of you who are open to Christian based music, I have to say that is probably one of the finest CCM albums I've heard in years. Milton is a songwriter's songwriter, and an inspired one at that. The songs on Follow Your Call will tug at your heart. It's a Wildy's World Certified Desert Island Disc, and I highly recommend it.

You can learn more about Michael Anthony Milton at http://www.mikemilton.org/. You can purchase a copy of Follow Your Call at http://www.musicformissions.com/www/products/110.14.
Posted by Wildy at 5:10 AM