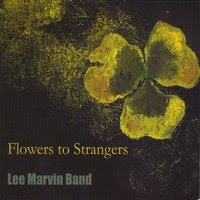 Lee Marvin lives and breathes New York City. It's in his blood; in his breath, and it emanates bright and dark in his music. Flowers To Strangers is a soundtrack of and inspired by New York. Infused with styles, sounds and rhythms that both amuse and confound, the album is 100% Lee Marvin and 1000% New York.

The album opens with Flowers To Stangers, a mix of styles including Latin-flavored jazz tune. Marvin himself has an unexpected voice. It’s one I can’t make up my mind entirely whether I enjoy. That’s not saying his voice is bad by any stretch. He handles the songs on Flowers To Strangers very competently. It’s more like meeting someone for the first time and just not hitting it off. Marvin’s vocal style is both too dark and too far back in the throat for my taste, but there will be folks out there who get it. Instrumentally Marvin and band are more than competent. Straws That Bind shows a band at the top of their game, with a lot of little interplay going on back and forth between instruments. Fans of Paul Simon’s 1980s stuff will love this song.

Waltz With The Cold Wind is the highlight of Flowers To Strangers, pulling Stevie Ray Vaughan style blues licks out thin air to illustrate the monsters under the stairs and other fears of childhood. Marvin sticks with the blues feel on Same Sun, which is a prime example of my ambiguous approach to Flowers To Strangers. I love the instrumental work here and really just couldn’t listen to the vocals. Other notable songs here are My Heart, Where Else Would You Be and She Dances On The Ruins.

Lee Marvin is an extremely talented instrumentalist, and he has a top notch band. His voice is enigmatic and perhaps an acquired taste. Flowers To Strangers is a treat from the perspective of composition and performance. I personally didn’t get the vocals, but you might.
Rating: 3 Stars (Out of 5)
You can learn more about the Lee Marvin Band at www.myspace.com/leemarvinband. You can purchase a copy of Flowers To Strangers at www.cdbaby.com/cd/leemarvin.
Posted by Wildy at 5:10 AM