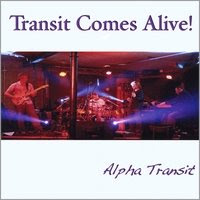 Alpha Transit was born in the fall of 2003 as a trio, interested in combining rock, jazz, funk, blues and electronica in a jam format. Adam Berzowski (keys), Geoff Howard (bass) and Tim Rush (drums) labored as a trio for two full years before adding guitarist Kirk Tatnall to complete their sound. Together and individually the members of Alpha Transit are responsible for nineteen recordings, most or all of which play into Alpha Transit's catalog in one fashion or another. Relying on structured improvisation and a bit of inspiration, Alpha Transit make music that hearkens back to the days of progressive rock, where riffing was an art form and not just a way to extend a meager set list into a 90 minute show. Alpha Transit took the stage of the Milwaukee Ale House in the summer of 2008 to record a show, packaged for you as Transit Comes Alive! (Along with the companion CD Made In Milwaukee). If you're into progressive rock or jazz then this is going to appeal to your taste buds.

Transit Comes Alive! opens with Tapping Chaos, a smart, funky jazz jam. The song works, although there is one keyboard solo in the middle that sounds like the tractor beam from the old Galaga arcade game. Next up is Leap, a lively eleven-and-a-half minute jam comprised of Spyro Gyra style fusion and electronic elements that give it a spacey sound. Second Chances moves into the progressive rock realm. It starts out strong but gets bogged down in repetition toward the end.

Simply Put starts out sounding like a country rock tune, morphing into classic rock and even jazz at times throughout the song. This is probably the most well-rounded and pleasant listen on Transit Comes Alive! Cuff mixes elements of jazz and rock, sounding vaguely like an Eric Johnson composition at times. Star is fairly standard fair with lots of improvised runs. The keyboard work here is particularly impressive, sounding like an old Hammond B3. Yeah, No! closes out the set at 17 minutes of frenetic music activity.

Alpha Transit delivers a series of musically satisfying jams and improvisations on Transit Comes Alive! This album will generally appeal to aficionados of modern jazz and experimental rock. Outside of that realm it may not spark a lot of interest. It's a solid album, just not terribly commercial and therefore is likely to be a niche recording. A good listen though.

You can learn more about Alpha Transit at www.myspace.com/alphatransit. You can pick up a copy of Transit Comes Alive at www.cdbaby.com/cd/alphatransit2.
Posted by Wildy at 5:00 AM

I am a big Alpha Transit slut so my opinion is going to be biased. I think on the originality scale these guys are the tops. Seriously, I really recommend the works of Tatnall, Berzowski, Howard and Rush. Gene