Review: Jessi Robertson - Who We Are, What We Have Done 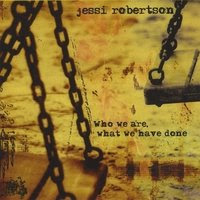 New York City's Jessi Robertson is an alt-folk Renaissance Woman. In addition to her music career, Robertson is a contributor to Urban Folk Magazine; a co-founder for Local Correspondents Community of independent artists and a curator for September Concert, an organization that puts on a worldwide concert series to promote healing and a sense of community of September 11th. Compared to Tori Amos, Keith Buckley and PJ Harvey, Robertson is an enigmatic songwriter who focuses first and foremost of the art of the song, making each composition an adventure for the listener. Who We Are, What We Have Done is Robertson's latest release; finding Robertson in complete creative and production control.

Who We Are, What We Have Done opens with Geometry Of A Heavy Heart, a deliciously smart and poignant folker that is extremely memorable. The song has a classic melody, intelligent lyrics and a story-teller's flow. Vocally, Robertson sounds a bit like Bonnie Raitt, with a warm-but-rough timbre that fits perfectly with the arrangement. The Weather opens with a sound that could be a heartbeat slowed down and drawn out into a rhythmic marker. If so, it is a metaphor for the song, which has a lot of heart but never entirely gets out of its own way. Ethereal harmonies can't save this song from the lack of energy that comes through. Papers And Magazines mixes a bare rock arrangement with electronic beats to support Robertson's multi-colored voice. The arrangement here is almost a bit lo-fi at times and the energy level just isn't quite there.

Lighthouse Keeper is another story. While continuing in the melancholy, slow theme that creeps into Who We Are, What We Have Done with the second song, Lighthouse Keeper has an almost urgent intensity that sits just below the surface. The tension in this song is palpable. Other highlights include It Gives, Mayday and City/Country.

Jessi Robertson is a talented writer with an colorful voice who is fun to listen to. The energy level on Who We Are, What We Have Done is very low at times, but there are some real gems here as well. Geometry Of A Heavy Heart is worth the cost of the album alone. Robertson shows enough talent and panache to keep doing this in the long term. Who We Are, What We Have Done is definitely a worthwhile listen.
Rating: 3 Stars (Out of 5)

You can learn more about Jessi Robertson at www.myspace.com/jessirobertson or http://www.jessirobertson.com/. You can purchase a copy of Who We Are, What We Have Done at www.cdbaby.com/cd/jessirobertson.
Posted by Wildy at 5:10 AM

This is a great resource page for us at Art of the Song Creativity Radio. Thanks for providing such a wonderful comprehensive service. Well done.