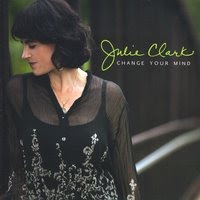 On December, 2008, Julie Clark will release Change Your Mind on Great Big Records. Clark is an openly lesbian musician who walks the fine line between folk and pop/rock. Her songwriting has been widely claimed, winning the Kerrville New Folk Songwriting Competition (joining alumni such as Lyle Lovett, Steve Earle, Nanci Griffith and Shawn Colvin). She's also won the Great American Song Contest and Best Audience Response at the Cornucopia Music Festival. Clark's music is full of bald honesty, jaunty word play, and a vision of change based in her own personal struggles. Having grown up as an extremely overweight child, Clark has shed nearly 200 pounds to reclaim herself as she wants to be.

Change Your Mind opens with the title track, a true Americana/country tune that calls upon individual self-reliance in order to find happiness. The song is quite lovely with a memorable melody. Superman takes on the death of Superman and the superficial nature of friendship. Clark steps up with an endearing ballad to her big brother in Growing Up. Jacket ads a little blues/rock sexuality to Change Your Mind in one of the highlights of the album. If It Weren’t For That tackles Clark’s struggle with her weight in an unusually honest autobiographical song. Long Way Down sounds like something The Indigo Girls might have recorded, from the style right down to the harmonies. It’s perhaps the most commercial song on the album, and a good pick to be licensed.

Courage Of Our Convictions is the centerpiece of Change Your Mind. It’s perhaps the most musically stunning and poignant gay rights anthem you’ll ever hear. With a jazz/blues background, including some filthy guitar work and Hammond Organ, Clark has reached deep down into her well of talent and come up with a musically superb vehicle for her message. Even the message of seeking out equality is handled with a panache and intelligence that will likely win hearts and minds. I’d Do ‘Em All (If I Could) is Julie Clark at her funkiest and most brazen. This is the sort of party song that gets parties shut down. It’s a lot of fun. Change Your Mind closes out with Roller Coaster, perhaps the most straight forward country tune on the album. It’s a good song but perhaps a bit anti-climactic after I’d Do ‘Em All (which probably should have been the closer).

Julie Clark is a talented singer/songwriter/story teller. Her voice is very affable and her blunt, personal story telling style is endearing. Clark has a real sense for melody and tension in her music and should be making music for many years to come. Change Your Mind is a gem worth checking out. And while music is often used to change minds, it’s good to remember that music can also change hearts. Clark has that gift.

You can learn more about Julie Clark at http://www.julieclark.net/. Change Your Mind will be released on December 5, 2008, and can be pre-ordered at www.cdbaby.com/julieclark2.
Posted by Wildy at 5:05 AM