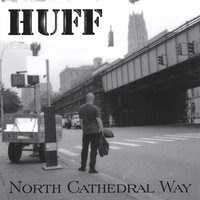 We recently reviewed Chris Huff’s Death and Texas LP. Not long after we received his debut CD, North Cathedrawl Way, in the mail. It's interesting stuff. Check it out!
North Cathedral Way opens with Ball And Chain, a dynamic song that allows Huff to show off some pretty impressive pipes. A highly rhythmic tune featuring Huff on vox/guitar with only percussion behind him, it's a great blues-influenced opening to the CD. The Night Cafe explores the downfalls of hanging with the immortal, the enlightened and the almighty. It's a great tune that's sure to offend all of those it doesn't entertain. Huff displays a very raw, edgy songwriting style throughout North Cathedral Way that is very much in contrast with his later recording, Death And Texas. There are a few lyrical turns here that are a bit awkward, but on the whole it's very strong songwriting and full of raw, dynamic performances that must have been unforgettable in the live environment.

Laura is a beautifully poignant love song that will make the mix-tape list for folks of that name. It's a fine bit of songwriting and performed in a highly personable, vulnerable fashion that is becoming both to Huff and the song. Mystic Town is another song that could be a classic. Huff sounds a bit like Jim Morrison here but the song is more in the style of very early Billy Joel (particularly non-album stuff that you'll find in his box set). Other highlights here include Van Gogh Blues, Broken, By The Grace Of God and the Dylan-esque Talkin' Benadryl Blues.

Chris Huff is a very talented singer-songwriter. This early work is a bit rough in patches but shows the distinct signs of the artist who recently released Death And Texas. North Cathedral Way is coffee house folk and blues at its best. This is a great marker of the early songwriting proclivities of Huff and will be ideal for fans. This is also a great disc for folk fans and acoustic blues fans. Be sure to check it out.
Rating: 3.5 Stars (Out of 5)

You can learn more about Chris Huff at http://www.huffmusic.com/, where you can purchase a copy of North Cathedral Way.
Posted by Wildy at 5:00 AM