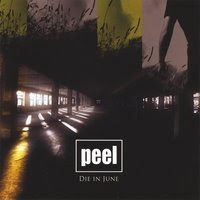 Oslo, Norway's Peel is back with an exciting four-song E.P. entitled Die In June. Peel has become well known and respected for their highly personal and emotionally bare songwriting; incorporating styles that run the gamut from industrial to metal to pop. Pim (lead vox/guitar); Bertzkii (drums); Dan (guitar/vox); Bjorn (keys/guitar) and Frikk (bass/vocals) continue to enthrall music fans from all walks of live in Scandinavia and abroad.

Die In June opens with Falling From Grace, a song inspired by a documentary on childhood abuse and how the abused come to feel their treatment is normal. The song is very powerful and written in a style reminiscent of early Bon Jovi material. It has a strong pop sensibility while retaining a distinct edge. The title track, Die In June examines romance through the eyes of one who has burned. The hope the narrator feels is tempered by the fear of hurting again. The chorus is full of big guitars that serve as a sonic metaphor for being buffeted by insecurities and fear. The song is very memorable with a strong melody and a great, heavy sound.
Second Man On The Moon examines the superficial nature of society in devaluing accomplishments just because they've been accomplished before. This is a great pop tune with rock embellishments that sounds like something that should have a lot of licensing potential. My favorite track on the disc is Unheard. It's a heavy tune that is reminiscent of the better of early Live material. The unseen/unheard outsider is the anti-hero hero, falling through the cracks before our very ears.

Peel wields a heavy pen; capturing strongly poignant ideas in song in a fashion that is neither condescending nor preachy. The arrangements are compelling and keep the listener interested and involved. This is intellectual heavy rock at it's finest. The only complaint you might have is that it's only four songs long. The Die In June E.P. will leave you wanting more of Peel.

You can learn more about Peel from http://www.peeltheband.com/. You can purchase a copy of Die In June at www.cdbaby.com/cd/peelmusic.
Posted by Wildy at 7:31 AM