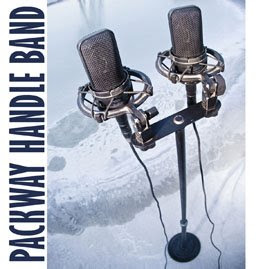 Packway Handle Band emerged from the same Athens, Georgia music scene as REM, the B-52's and Widespread Panic. Born in 2001, they won several local awards, and by 2006 were touring the country to great acclaim. Performing in the old "gather round the mic" style, Packway Handle Band seems to make friends and fans wherever they go with their classic style of play and honest-to-goodness sense of humor. Their fourth release, the self-titled Packway Handle Band, was released in 2007 to much acclaim, resulting in the band being profiled in Bluegrass Now Magazine in April 2008 as a Bluegrass Band To Watch.

Packway Handle Band sets the tone right from the start. The easy vocals of Tom Baker, Josh Erwin, Andrew Heaton and Michael Paynter and inspired fiddle playing of Heaton is icing on the cake of these eleven classic folk grass tunes. Gets Me Every Time is a perfect start to a kitchen party or a CD, and you could settle in for either one listening to these tunes. Spanish Scissors is an interesting composition. Based in Celtic/bluegrass musical traditions it incorporates Spanish-style guitar for an amazing instrumental trip. Strangers is a highlight, from the driven vocal line to the tight as can be arrangement. This would make an amazing acoustic single for rock/country radio. I am not sure if it would fly, but its so good it just might.

You'll want to check out the guitar/banjo picking on Tossin' The Beefcake. Earl The Duck is a bizarre love song to a pet that will make fans of The Brother Creeggan smile. The harmonies here are very well done, even if the song is a bit surreal. Other highlights include The Story (which could make it as a rock tune), the jazzy Downpour, River Delta and Can't Win For Trying. The album closes out with a cute novelty-ish tune called Satan's In Space. Don't let the occasional kitsch fool you hear, this is one first-class folk/bluegrass outfit.

Packway Handle Band makes serious music with a sense of humor. Their fourth release, Packway Handle Band is very much worth a listen or six. Fans of country, bluegrass or Americana will eat this up. There are humorous elements throughout the songs that may remind folks of Barenaked Ladies early stuff or Moxy Fruvous. If you're into the sort of music we've mentioned here then Packway Handle Band is for you. If you're looking to broaden your musical horizons with some first class music, this may be a good place to start.
Rating: 4.5 Stars (Out of 5)