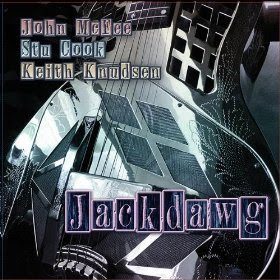 The long awaited and much discussed CD Jackdawg is due for release on March 17, 2009. This near-legendary album was recorded in 1990 and features John McFee and Keith Knudsen of the Doobie Brothers along with Creedence Clearwater Revival's Stu Cook. The band was an outgrowth of Southern Pacific and was recorded at McFee's Lizard Rock Studio in Solvage, Ca. The Jackdawg recordings stayed hidden in a vault until after Knudsen's death in 2005. The eponymous album includes thirteen original tracks plus covers of Roky Erickson's Cold Night For Alligators and Van Morrison's Wild Night.
Jackdawg opens with Bayou Rebel, an ode of sorts to Creedence Clearwater Revival. Bayou Rebel sounds like something that might have come out of CCR in their heyday but updated for the early 1990's when it was originally recorded. When The Sun Don't Shine is a tasty bit of modern rock with southern rock ancestors. The guitar work here is excellent, and the melody is quite memorable. The Men Who Would Be King was inspired by The Beatles, hinted at the by the harmonies at the end of each refrain and the occasional musical reference.

Hunger is a big stadium rocker that sounds like top-40 gold circa 1985. Ghost Dance has no pretensions about it, sounding more like something you'd expect to hear out of Lou Gramm than a conjunction of ex-Doobie and CCR guys. It's quite good, just a bit of a sonic surprise you might not have expected. Jackdawg returns to familiar territory with the old school R&B rocker Take It Off. Kisses In The Rain is another one of those songs that would have been a huge hit in a different era. This one sounds like a cross between Don Henley, The Beach Boys and Huey Lewis' backup band, The News.

Other highlights here include I Couldn't Help Myself, the big guitar rocker Quicksand, the Hagar-era Van Halen sounding Lookin' For Trouble, Young Ones, and The Girl From Oz. The Girl From Oz was inspired by the lead singer from The Divinyls, and sounds like someone took a variance on the bass line from Styx' Too Much Time On My Hands; added some Alex Liefson (Rush) style guitar work and a big 1980's rock chorus to create the perfect pop/rock song. The covers of Cold Night For Alligators and Wild Night are quite well done. They fit with the character of the rest of the album, but don't quite blend in the way the rest of the tracks do.
Jackdawg is a brilliant album. It's too bad this has been hidden away for almost two decades. If released back in 1990 it might have been a major hit for Cook, McFee and Knudsen. Today it will be appreciated by those in the know, but probably doesn't have the commercial reach it might once have had. Expect to hear a handful of tracks from this one show up on soundtracks, commercials or wherever else the marketing folks can find a spot. The music is excellent, and worthy of the resumes Jackdawg brought into the project.

You can learn more about Jackdawg at http://www.jackdawg.net/. You can order a copy of Jackdawg at Amazon.com.
Posted by Wildy at 5:00 AM