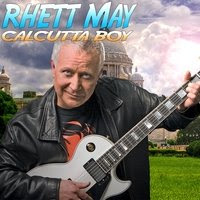 Music's Prodigal Son, Rhett May, has come home. After three decades climbing Jacob's Ladder in the corporate world, this Calcutta, India born, Australian based rocker has returned to music. Formerly of the Flint Stones, one of India's most popular pop groups at the time (and catching the eyes/ears of George Harrison and Apple Records), May followed as part of a series of popular Australian Garage bands (Oz, Shakespeare Sarani, Prodigy and Lucifer). Influenced by Carnatic and Hindustani musical traditions as well as the pop music of the time (The Monkees, Cream, Hendrix, Ricky Nelson), May developed a musical style that was all his own. Now, with longtime collaborator James Payne, May returns to the music scene with the four song E.P. Calcutta Boy.

Calcutta Boy opens with There's A Little White Powder, a song that tackles cocaine addiction. The song has a strong pop feel to it and sounds like something that might have come out of England in the early 1990's. Lyrically the song is a bit awkward at times, but there's a definite quality to it that would play well in a dance club. African Queen has a unique sound, opening with some unusual harmonies and a standard yet catchy dance beat. The vocals are mixed too low here, being swallowed up by the electronic instrumentation. Have Your Arms Been Missing Me suffers from a similar problem. The vocals are essentially buried under the music. The musical arrangement is pleasant and somewhat catchy but is also fluff, to speak plainly. Mirror Mirror is the most musically interesting piece on Calcutta Boy, but the mix here again undervalues the vocals. The Calypso arrangement is fun and carries the song for the most part, but doesn't entirely save the song from itself.

Rhett May has a definite pop sensibility in the music he writes. His melodic creations are generally interesting and catchy. Lyrically he's awkward at times. The real problem with Calcutta Boy is the mixing. Vocals are buried within or underneath instrumental parts, making it very difficult at times to really get what May is singing. At the end of the day Calcutta Boy is an interesting listen, but probably not a regular one.

You can learn more about Rhett May at http://www.rhettmay.net/. You can purchase a copy of Calcutta Boy at www.cdbaby.com/cd/rhettmay2.