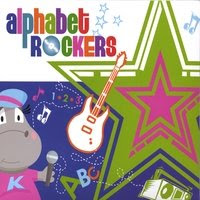 San Francisco's Alphabet Rockers offers up educational hip-hop for kids in the kindegarten to 2nd grade. Along the way they have created fun, feel-good educational music that will keep the whole family rockin' and swingin'. Drawing from influences including 1980's hip-hop, funk, soul and Rock N Roll, Kaitlin McGaw (The Simple Things) and Dawn Richardson (4-Non Blondes) get down like no one's business. The fourteen songs on their debut CD, Alphabet Rockers, were written with teachers from around the country to ensure the material was usable in an educational sitting, but the music is to the usual high standards of McGaw and Richardson. Kids and parents alike will love this.

If you're familiar with Kaitlin McGaw from The Simple Things then you're in for a particular surprise. The purveyor of lustrous songs of introspective angst does a one-eighty and dives whole-heartedly into the world of 1980's hip-hop for children. If this seems like an improbable or impossible switch then you need to listen to the album, because it works. Alphabet Rockers works because it deals with subjects that will appeal to the younger set without ever once talking down. Similar to folksters Trout Fishing In America, McGaw & Richardson have found a voice that speaks the language of wide-eyed wonder without pandering or condescending.

Highlights include The Seven Days Of The Week (Reggae), The Money Song (funk), The Rainbow Song (hip-hop/R&B) and It's Time For Something. McGaw weaves her golden voice when she's not laying down rhymes, and Richardson creates a tapestry of unusual and varied beats that propels the music. And just for a treat Alphabet Rockers throws in 100th Day Of School; more of an alt-country rocker than anything else.

Alphabet Rockers is a Parent's Choice Award Winner and a National Parenting Publications Award Winner for a reason. The music here plays equally well with kids and their parents. McGaw and Richardson speak to their audience eye-to-eye. While the joy of creation is still important here, it is great to see two distinct musical talents, one well established and the other who will be, using their talents to give back to the next generation of musicians, artists and parents. Alphabet Rockers is a dream come true as a children's album. Smart, funny, full of joy and always on the mark with the intended audience. A must recording for the kid in everyone.