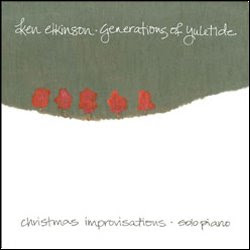 Ken Elkinson is a funny guy, and one heckuva piano player. With airplay on over 350 outlets internationally, Elkinson has obtained a modicum of notoriety that is hard to find in new age music. Based in Los Angeles, Elkinson is the owner of his own label, a composer and performer whose five previous releases have found an international audience. His sixth CD (and second of 2008) Generations Of Yuletide is a collection of sixteen Christmas classics and rarities lovingly presented by Elkinson with improvisation and embellishment. The album is a highly enjoyable listen.

Christmas piano albums are a dime-a-dozen ever since stores like Brookstone and Pottery Barn began creating their own instrumental collections. Nevertheless one comes along periodically that makes you stop and listen. Ken Elkinson has created such an album in Generations Of Yuletide. Elkinson has an ability to present standards with improvisation in a way that highlights the original composition while bringing new life out of songs you've heard many times before. The CD opens with The Star Of Christmas Morning, a lovely rendition performed in ebbs and flows that mimic the ocean tides. Elkinson places his stamp firmly on the music early on. Greensleeves is a beautiful rendition that plays with some unusual key changes. Lo, How A Rose E'er Blooming is a real treat. This is not a song you hear all the time at Christmas; coming from Germany in the late 16th century, the song was adopted into the Anglican Church musical tradition and is usually heard in churches. It is a classic melody that was later co-opted by Johannes Brahms for a choral fantasy for organ. This track alone makes the disc worth having.

Elkinson's version of Silent Night is lovingly traditional while allowing the artist room to play, and We Three Kings is a delight. Other highlights include In The Bleak Midwinter (based on the Holst version), Carol Of The Bells, The Little Drummer Boy, I'll Be Home For Christmas and Have Yourself A Merry Little Christmas.

Generations Of Yuletide is a sublime listen. It's perfect for that Christmas cocktail party, or for reflection upon holidays past, or even for considering the meaning of this time of year. Ken Elkinson has a gift for embellishment and variation that ads to the original songs without stripping them of their basis character. These type of solo piano Christmas albums I always approach with a little bit of trepidation, if only because the last decade saw so much cheese reach the marketplace. Elkinson rises above the high commercial impact, low quality recordings of your basic mall culture with a well executed album that shows deference to the songs alongside a musical vision that is both loving and respectful. Generations Of Yuletide is a Christmas must.

You can learn more about Ken Elkinson as well as purchase copies of Generations of Yuletide at http://www.kenelkinson.com/.
Posted by Wildy at 5:10 AM