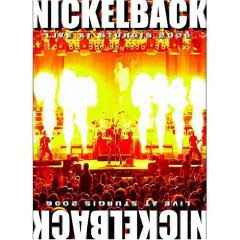 Canadian rock stars Nickelback played to a raucous crowd of 40,000 attendees of the Sturgis Motorcyle rally in Sturgis, South Dakota in 2006. Nickelback were at the height of their multi-platinum success going into this show and did not disappoint their fans there. Live At Sturgis features 12 songs from that show, and more than a little adult fare. This disc is great for fans, but parents might want to think twice about buying this for their teens or pre-teens.

Nickelback love putting on old-style rock shows, complete with pyrotechnics, lasers and effects. It’s all here, and the Sturgis rally-goers, high on a week of motorcycles and whatever else, eat it all up. Nickelback doesn’t disappoint with songs such as Photograph, Never Again, How You Remind Me and Too Bad. They even slip in an interesting Side Of A Bullet in tribute to Pantera’s Dimebag Darrell. Other performances come up flat, however, with Animals leading the way (both as the first song on the DVD and the worst).

The energy is here through most of the set, but Nickelback does have a reputation for being uneven. One great performance can be followed by an absolute dud, and vice versa. Parents be warned, as indicated before this show was played before the denizens of a bike rally. There are lots of naked breasts floating around, and a lot of language you may not want little fans to hear. Just use your best judgment.
Now that I’ve absolutely guaranteed that every 14 year old boy who reads this will buy it, I’ll say that it is, on balance, a decent show. It’s fairly typical fare for Nickelback. So if you’re already a fan, you’ll like it. But if you’re already a fan you’ve seen it all before (at least if you’ve been to a show). Live At Sturgis is good fare for established fans, but probably on the take it or leave it line for anyone else.

You can learn more about Nickelback at http://www.nickelback.com/. You can pre-order Live At Sturgis, available January 3, 2009, at Amazon.com.
Posted by Wildy at 5:00 AM

Well, I do not actually imagine it is likely to have success.