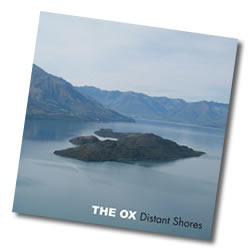 Paul Hogg is The Ox, the Leamington Spa, England down-temp0 electronica artist who is making a big name for himself. Nicknamed for his stature in college, The Ox shows a broad array of talents on his debut CD, Distant Shores. The Ox played all instruments and produced the album, ensuring that his musical vision came through as clearly as he heard it in his mind. Inspired by artists such as Moby, Craig Armstrong, Groove Armada and Chic, The Ox doesn’t limit himself just to down-tempo, but Distant Shores is any indication it may well be his best stuff.

Distant Shores isn't cerebral. It's not specifically organic. It's in your face, get down and dance techno/electro with enough attitude and energy to move the feet of folks who don't like electronic music. There's no apologies and no hedging here. It's not inspiring or uplifting, and isn't pretentious in its presentation. There are ambient moments, and there are even moments of beauty, like the bare piano at the beginning of Footprints. Footprints isn't eloquent or pretty, but there is a sustained, regal beauty in the two chord progression that opens this song. Astral Traveler is quite moving while bordering on outright pop at moments with its pure disco baseline. Other highlights include Sparks, the pure pop of Take Your Time, the acoustic guitar led Evergreen and Here Is Home.

Distant Shores isn't typical. It's at moments jarring, beautiful, soaring and unique. The Ox's moods and modes change here often enough that you almost forget your place and time for a few moments. A distinct pleasure.
Rating: 3.5 Stars (Out of 5)

You can learn more about The Ox at www.myspace.com/oxtunes or http://www.ox-music.com/, where you can purchase a signed copy of Distant Shores.
Posted by Wildy at 5:00 AM