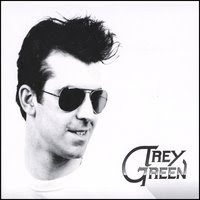 I'm not qualified to make a clinical diagnosis, but Trey Green is nuts. Bonkers. Stark-raving mad. Let me be clear about this. Trey Green is indubitably, wonderfully insane. His bio references accomplishments such as being hospitalized with several fish lodged in his nasal passage and being arrested on three occasions for failing to move at a green light. Musically, Green is an enigmatic figure, playing whatever he pleases from moment to moment. Stylistic consistency goes out the window in favor of whatever pleases him. This probably explains why Green connects so well with audiences. There is no planning, no pre-packaged musical experience. Trey Green is what he is, like it or not. His debut album, Trey Green was made after the same fashion. No matter who you are, you'll find something you like here.

Trey Green opens with Smooth Breakdancin' Guy, a tongue-in-cheek exploration of a guy who thinks he can dance. We all know someone like this, or are that someone. The dancing is probably more legendary in the mind of the dancer than in the viewing public. My Girlfriend is an extreme example of excusing the shortcomings of those we love. Green puts aside the novelty material for Won't Last Forever, a poignant look at goodbyes. Green hits the height of hilarity on My Fantastic Ass. I don't think I need to say any more.

Part of the mystique of Trey Green is his voice. It's not perfect. It's not pretty. It's slightly jarring and top heavy, but it's perfect for the material he sings. Anachronistic in a way that is memorable and distinct. Once you know his voice you'll always recognize it right away. This quality is often times more desirable than "pretty". Just ask Brad Roberts (Crash Test Dummies). You'll want to check out Mad Crush and Go Away. Other highlights include The Forever And Ever Song and Tavarua.

Trey Green mixes observations inane and insane with poignant moment and memorable arrangements on his self-titled debut CD. The end result is a journey through madness with the occasional foothold on sanity; creating a highly entertaining if off-kilter musical experience. Trey Green isn't afraid to just be who he is on CD and let you judge him on the merits. The end result is glorious insanity, the kind you run into every single day in the real world, but with a touch of humor and panache. A joyous romp through Green's Id without safety nets. A must-hear.

You can learn more about Trey Green at http://www.treygreen.net/. You can purchase a copy of Trey Green at www.cdbaby.com/cd/treygreen, or on iTunes.
Posted by Wildy at 5:10 AM