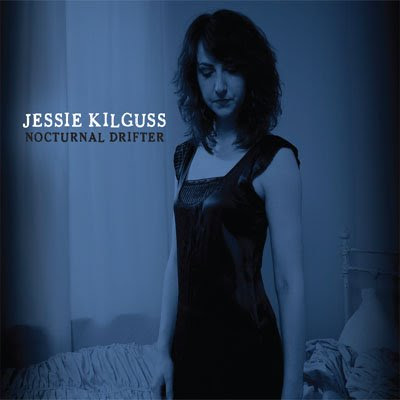 Jessie Kilguss is a late bloomer as a singer/songwriter, but has spent her whole life trying to find her way there. She began as an actress, classically trained at NYU’s Tisch School of the Arts and the Webber Douglas Academy of Dramatic Art in London. Kilguss has done her turns on the stage, but after sharing the stage with Marianne Faithfull Kilguss became hooked on the idea that she might control her own development/writing/performance. The outgrowth of that revelation was Kilguss’ 2007 debut album, Exotic Bird. Artists grow and develop, and in less than two years Kilguss has grown immensely. Her next release, Nocturnal Drifter is due January 6, 2009, is leaps and bounds ahead of Exotic Bird, itself a Wildy’s World Certified Desert Island Disc.

After hearing Jessie Kilguss' Exotic Bird earlier this year she quickly became one of my favorite listens. Kilguss was confounding at first, being so generally unwilling to fit a particular mold that she forced me to put everything else aside and listen to her CD, and in doing so I discovered something of a genius. When I first heard Nocturnal Drifter I became a bit concerned. Big Lush arrangements and even the occasional electronic composition seemed to suggest the gentrification of Kilguss. After several listens I am delighted to say that Kilguss is as obstinately unclassifiable as ever. Rather than stick to one theme, Kilguss writes from the heart of a person living in an ever changing world. The results are a more lush, sonically gorgeous set of songs that on her previous offering, but with that same air of disaffected genius that accompanies true art.

The Brooklyn-based actress/singer, or dare I say singer/actress opens Nocturnal Drifter with Gristmill. It's a gorgeous cabaret-style piece that mourns the constant physical and emotional friction of living in a highly compressed environment like New York City. Americana is one of the more straightforward rock tunes you'll hear out of Kilguss, and is recorded in gorgeous layers to create a big, lush sound you won't forget. A Little Place Behind My Eyes was the track that initially caused me to pause, as I am always a little nervous when a songwriter first ventures into electronic sounds, but Kilguss makes the transition flawlessly. A Little Place... frames Kilguss' voice perfectly and it turns out to be one of the true highlights of the album.

Time On My Hands is an absolutely amazing piano ballad. It's the sort of musical soliloquy that could headline a rock musical; it shows the inner demons of the narrator eating away at her confidence in a relationship. It's painfully beautiful in it's candor. I Don't Need People is the dysfunctional reaction to repeated loss in a relationship. Once again Kilguss hits the honesty meter at the highest rung while extracting painful beauty from her own experience. This Time is a loving ode that is part perception and part creation. It is a frighteningly accurate description how romance makes liars of us all, most of all to ourselves.

31 is a reflection on how time creeps up on us all. 31 is one of the best examples of what is a trademark of Jessie Kilguss' songwriting. She has an ability to write about things that have been written about thousands of times before without coming within a mile of a cliché. Her thoughts (as lyrics) are original and concise and illuminating. Add to this unusual and creative compositions that tease the lyrics as the sea teases the boats that sail upon her and you have the creative genius that is Jessie Kilguss. Marie Antoinette Song is a wonderfully bizarre exploration of unrequited love and the sort of insecurities that play havoc on the mind. Something About Lonely is a lilting tune that mourns the extended presence of no one, seeming to question the insular emotional fortresses that people build about themselves in their younger years. Nocturnal Drifter closes with Strangers On A Train, which aptly sums up the experience of being alone in a mass of humanity.

Jessie Kilguss just keeps getting better. Nocturnal Drifter may not get the attention of national or international press, but it's not because it doesn't deserve it. Nocturnal Drifter is a cohesive collection of songs that is by turns gorgeous, haunting, disturbing, theatric and disturbingly candid. Jessie Kilguss bares her soul across the ten songs offered here, and the results are absolutely unforgettable. Fans of Tori Amos and Kate Bush will love this for the disjointed candor. Fans of Sarah Slean will get the perspective. Fans of Sarah McLachlan will love the lush accoutrements of Kilguss' songs, and fans of great songwriting will be enraptured. Don't be surprised if Nocturnal Drifter is looked back upon in certain circles as a seminal album of the Indie movement in the first decade of the twenty-first century. It's certainly a Wildy's World Certified Desert Island Disc. Don't miss out on this one.

You can learn more about Jessie Kilguss at http://www.jessiekilguss.com/ or www.myspace.com/jessiekilguss. Nocturnal Drifter will be released on January 6, 2009. Retail availability info was not available at the time of this review, but it’s safe to assume it will be available through Amazon.com and CDBaby. Keep checking Kilguss’ site for more information.
Posted by Wildy at 5:15 AM