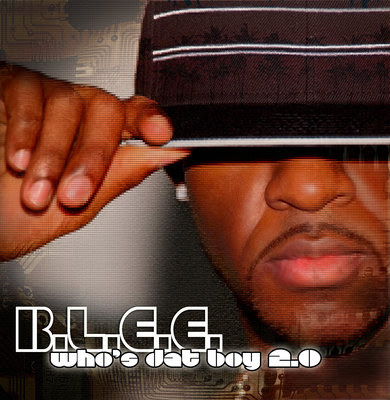 The Black Lion Of Eternal Excellence, AKA B.L.E.E. is a Montserrat born London resident who lost his home to a 1995 volcanic eruption. This even shaped his life in many ways, driving him to music for comfort, but also teaching him something about the important things in life. Love, people and life itself hold highest currency for B.L.E.E., and it comes across in his music and rhymes. Who's Dat Boy 2.0 is the lamented first single from an album that will never be. Changes in musical direction prompted B.L.E.E. to drop the album of the same name and start working on The Black Lion L.P., due in early 2009. For now, we have this little slice of B.L.E.E.'s musicality to sample.

Who's Dat Boy 2.0 opens with Who's Dat Boy, a fresh and snappy rap tune that shows its Caribbean roots. B.L.E.E. has a lot to say and he does so literately. He displays just enough of the American aggressiveness to compete in that market while maintaining some of the quiet dignity one associates with England. B.L.E.E. is able to create a dynamic sound without sounding overly produced and without containing the infectious spirit of his music. The song Who's Dat Boy 2.0 is a remix and partial re-imagining of the same song. This version sounds more like American rap, but maintains the literate and intelligent lyric style displayed on the opening track. Remix is pure dancehall material -- highly entertaining. Boss Swag falls off a bit, not having the same energy nor sparking the same interest as the rest of the EP.

B.L.E.E. brings the sort of energy and fresh feeling that helped early rap gain such mainstream popularity. B.L.E.E. could be big with the right breaks. Who's Dat Boy 2.0 for the most part will make you wish he released his first album after all. Then again, there's always The Black Lion LP to look forward to.
Rating: 3.5 Stars (Out of 5)