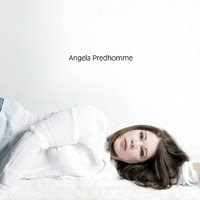 Angela Predhomme isn’t your usual singer-songwriter on the rise. Predhomme has been in love with music all her life, but got a later start on writing and performing than many artists. The Detroit native has been a regular on Mackinac Island for the past three years, where the movie Somewhere In Time was shot. Her producer, Scott Christopher, is her old guitar teacher. Reading through her bio you get the impression not so much of a pop star but of, perhaps the girl next door. One listen to her debut CD, Angela Predhomme, and you’ll know that impression is the right one.

Angela Predhomme opens with Passing The Days, a sweet, bluesy country tune. Predhomme is in fine vocal form here, with tremendous tone and color in a voice that is at once surprising and comforting. Everything Is Alright is a memorable tune that you'll carry with you long after the CD stops spinning. Georgia is a bit of a change-up from Predhomme. A great story song, but Angela Predhomme is just a bit too sweet here to pull it off entirely. This song requires just a bit more grit than Predhomme projects, but is still a strong recording.

Too Much Time is a song of self-reliance than is both endearing and powerful. This may be the most well-written and performed song on the album. Just Like Magic has a vaguely wanton quality to it that is surprising. Predhomme shows a darker side that you might not suspect. She's back to her sweet, introspective self on If I Could Love Like My Dog, a song that's so pure it's almost kitschy. Other highlights include Transparent Eyes, Nemesis and Little Girl. Little Girl is a special song with a very positive message. It's carried by a strong melody and leaves you better at the end of Angela Predhomme than when you started out.

Angela Predhomme has real talent for writing and performing songs. She comes across as sweet and innocent and real, kind of like the classic girl next door. She surprises with mild shadows and light at times, but never truly crosses over into the darker side of human nature with the songs on her self-titled debut. She's the sort of recording artist you'd be proud to have your teenage daughter (or son) listening to as a role model. Currently residing in an almost adult-contemporary style, Predhomme shows flashes of real pop sensibility on her debut. As she develops this sense, you may find her songwriting open up and display more layers of her self and her sense of the world, but this is a great start.