Review: Cash Cash - Take It To The Floor 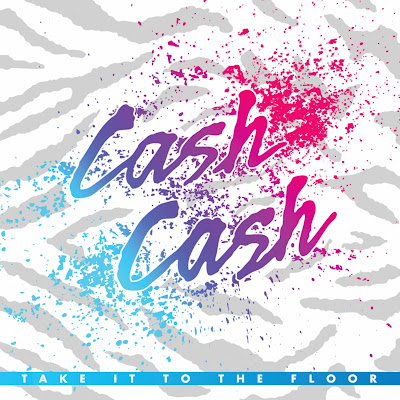 Cash Cash - Take It To The Floor
2009, Universal Republic

Roseland, New Jersey’s Cash Cash is on the verge of something big. Brothers Jean Paul and Alex Maklhouf, Samuel Frisch and Anthony Villacari come on with a fresh sound steeped in 1980’s power pop and accented by modern electronic instrumentation. Round it out with big harmonies and a bit of that infectious bubblegum pop spirit and you have a tasty pop confection. The band’s full length debut, Take It To The Floor, is available today, December 23, 2008, as a download, and will be released on CD on January 20, 2009.

Take It To The Floor opens with Breakout, a peppy pop/rock tune with big harmonies in the chorus, a strong melody and an unbelievably catchy beat. Cash Cash has perfectly captured the spirit of classic pop music. Take away the electronic embellishments and you have a song that would have fit perfectly in the early days of MTV. Sugar Rush is aptly named, and almost too sweet for consumption. This is bubblegum pop at its most notorious, and will get countless spins at pop radio. You'll love it up until the point you start to hate it from overexposure. Concerta is a big electro-rock offering that's catchy with a great guitar hook. The big arena-rock harmonies here make the song as the verses themselves fall a little flat.
Two Days Old has pretensions of being a big guitar-rock style song. The heavily distorted synth opening is complex and fun listening, but resolves into a too-mundane verse. The chorus recovers with a great pop melody, but the end result is a disjointed tune that sounds like three separate songs were forced together. Your Love recaptures the strong pop sensibility that Cash Cash is so very capable of. This one has a bit of a new wave feel to it, but has very strong commercial viability. Dynamite is another strong pop contender, sounding a bit like a 1980's Mike Rutherford composition (stylistically).

Cash Cash has a strong sense of crisp melodies and pop arrangements that go down like cold water on a hot day. Take It To The Floor has some great pop/rock moments as well as a few songs that don't quite make it. A strong pop debut that is sure to bring Cash Cash significant commercial success. Right now Cash Cash has a lot of inertia based in newness and infectious song writing, but it will be interesting to see how they grow over a few albums, because there is real talent here.
Rating: 3 Stars (Out of 5)

You can learn more about Cash Cash at www.myspace.com/cashcash or http://www.cashcashmusic.com/. You can download Take It To The Floor on iLike. You can pre-order a CD with a signed booklet through Newberry Comics.
Posted by Wildy at 5:00 AM

I could not disagree more with your feelings on the verses of both concerta and two days old. Calling the verse of concerta flat seems an uneducated comment, as the verses provide a great deal of dynamic in the song instead of one steady feeling throughout. I'm also a bit confused as to what you consider mundane about the Two Days Old verse, that just doesn't really hit home for me.

I am glad you've thought about it and deepened your experience of the music. I would point out that your comment has less power by the transition from disagreeing with my feelings about the music to calling my comment uneducated. You'll be more persuasive by emphasizing the positive in your own argument rather than trying to label my position as anything other than what it is, an opinion. Thanks for taking the time to disagree!