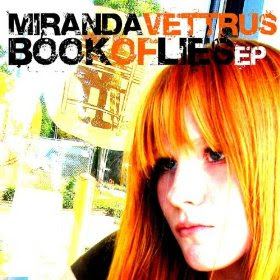 Salem, Oregon’s Miranda Vettrus has a unique pop sensibility that comes from years of hard work at song craft and natural talent. She has a voice that rivals some of the best in the music business, and she’s all of fourteen years old. Growing up in an amusement park, Vettrus has learned to live without fear; without barriers. No one’s ever told Vettrus she shouldn’t be able to do the things she does, and therefore its never occurred to her how truly unique she is. Her debut, the Book Of Lies EP was released in November 2008. It’s the first volley from an artist who has a lot to say. You don’t want to miss this one.

Miranda Vettrus sounds like what Avril Lavigne was supposed to be; someone who eschews the pop world’s wants and gimmees and writes for herself. Book Of Lies EP is three songs of edgy pop-rock that pays no heed to the bubblegum style that pervades the Disney set. Vettrus shows musical backbone and grit, plus a talent for writing songs that seems to far exceed her fourteen years on Earth. Book Of Lies is an amazingly mature shove-off song that calls out a love interest for the mix of dishonesty and neediness that is a recipe for dysfunction. I Know Better displays the sort of perspective and maturity that most of us don't acquire until somewhere around age 30 (give or take) when the opportunity of youth hedges in the face of advancing time and the promise of security. Fairytale is the best song of the set. It is a real world look from a surprisingly even-minded soul who has already put aside youthful things and is looking for the real thing, romantically.

Miranda Vettrus is mature beyond her years; she displays the pop-centric songwriting ability to convey ideas to a great many people, and the maturity and lyrical incisiveness to make sure those ideas hit home. While I fully applaud the talent and presence of this young star-to-be (and she is), a part of me also mourns the loss of innocence and youth so young. Vettrus represents both the brightest and darkest aspects of the progression of society in an incredibly talented and vibrant package. Book Of Lies should be the start of a very long and successful career for Miranda Vettrus.
Rating: 4 Stars (Out of 5)

You can learn more about Miranda Vettrus at http://www.mirandavettrus.com/ or www.myspace.com/mirandavettrus. The Book Of Lies EP is available as a download only through Amazon.com or iTunes.
Posted by Wildy at 5:05 AM

For my part every person should read it.