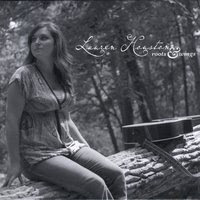 Morning View, Kentucky is the home and spiritual base of Lauren Houston. Raised by hard-working parents on classic Rock and Roll and singer-songwriters, Houston developed a taste for performance early on. By the time she was in college she was ready to start performing as part of the Cincinnati-based trio Mr. Dub and the To Be’s, but shortly thereafter began on her own solo journey. Confessional songwriting is Houston’s style. “Six strings and the truth” is the motto on her MySpace page, and Houston walks the walk in every song on her debut album, Roots & Wings.

Roots & Wings is a classic country album with great musicianship, strong songwriting and the plaintive, sweet voice of Lauren Houston, but something truly great is afoot here. It's rare that I make a point of elevating a particular song above the album it comes from, but in this case I must make an exception. Fight This War should put Lauren Houston on the map in a big, big way. It's the ballad of a soldier's wife in a time of war. Houston plays the protagonist here, laying her heart bare as the wife of a soldier ("I'll fight this battle and you fight this war"). The song is astoundingly touching; a heart-breaking look at the thoughts and emotions of the ones left behind. It's patriotic and full of love for the soldier and is a well-told story to boot. If this song ever makes it to popular country radio it might never come out of rotation. At the very least it's the sort of song that should be licensed for movies about or based in the Iraq War/War On Terror that will be made in the coming years.

Sexy Boots is another highly commercial song that should do well for Houston. This is the sort of song that someone like Shania Twain could buy her next mansion with. Lauren Houston has a real knack for pop-country as displayed here, and she can even sing without a backing vocal track! Mason's Daughter goes more a traditional country feel and shows off the sweeter side of Houston's voice in fine fashion. Be sure to check out Can't Get Enough, a poignant love song that holds that same sense of sweetness Houston projects through most of her songs. Other highlights here include Wasted Emotions, You Feel Like Home, Heart In Mind and Mr. Tree. As an afterthought, a country rock mix of Sexy Boots is included to give you an idea of what someone like a Mutt Lange might make of her amazing songs.

Lauren Houston is a talent. She sings, she writes well and she has that down-home girl next door aura that is neither false nor cliché. Roots & Wings should help Lauren Houston ascend the country ladder, and Fight This War could be the song that allows Houston to look at wherever she wants to be and declare that to be the top. If that song ever gets into major distribution there won't be anyone in the business who will argue with her. This is a must have disc for that song alone, but take away Fight This War and it's still a very strong release.
Rating: 4.5 Stars (Out of 5)

You can learn more about Lauren Houston at http://www.lauren-houston.com/ or www.myspace.com/laurenhouston. You can pick up a copy of Roots & Wings at www.cdbaby.com/cd/laurenhouston.
Posted by Wildy at 5:37 AM

she,s a true talent in greater cinn.iam sure she be known as a national artis in a short time .