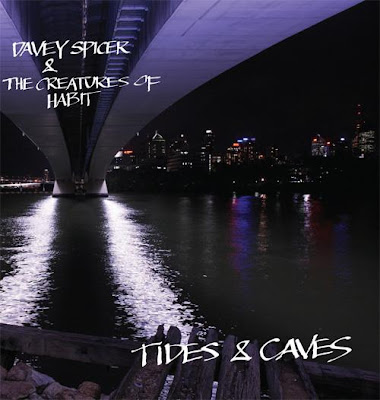 Davey Spicer & The Creatures Of Habit are a Brisbane, Queensland (Australia) trio with an eclectic ear. The band’s MySpace page implies that if you want to know about the band’s personalities to read the Diagnostic and Statistical Manual of Mental Disorders (DSM-IV). Personalities aside, Spicer’s trio has a very eclectic and unusual set of influences. Their EP, Tides & Caves is available if you can find it. Let’s check it out!

Bang Bang Baby Goodbye opens Tides & Caves; a frenetically dangerous get lost song if ever I've heard one. This song really moves and would sound incredible done by a blues-rock outfit with a big guitar sound. As it is it's en extremely entertaining listen you won't be able to get out of your head. Daydream was a little lost on me. It's a sweet song with a pleasant melody but gets a little too caught up in repetition at times. Human Obscene is an extremely well-written song with real movement and a great acoustic hook. The arrangement here suggests the craven attitude that the title suggests. Soft & Out Of Focus is perhaps a little too aptly named. It's more ambient than anything, relying on Spicer's plaintive vocal and bland acoustic guitar accompaniment. Credentials completely turns the momentum around however, in what may be the best song Spicer has written between Tides & Caves and his other EP, Feathers And Nails.

Tides & Caves is a little bit uneven, with three songs really hitting the mark and two others that seem to get a little lost on their way home. What is abundantly clear is that Spicer is a very talented songwriter (even the best ones miss once in a while). Spicer plays the role of enigmatic front man in the same vein as Ian Anderson, displaying (or at least suggesting) a darker aspect of his own personality over the course of unusual and very memorable songs. This EP is definitely worth a listen.

You can learn more about Davey Spicer & The Creatures Of Habit at www.myspace.com/daveyspicercreatures. You’ll have to contact the band through their MySpace page for availability of Tides & Caves..
Posted by Wildy at 5:05 AM