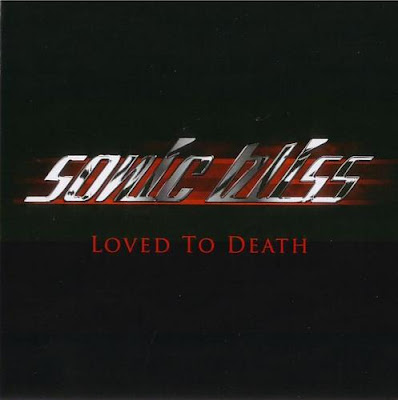 Sonic Bliss was born of five New York City music scene vets and one newcomer. The band seeks to bring old school classic rock into the twenty first century with smart lyrics, powerful songwriting and an explosive stage show. Vocalist Rene Berrios sounds like the ideal rock and roll front man, with a big powerful voice that can soar as easily as growl; Two lead guitarists, Roger Petersen and Kerry Christian Agnew give the band a Styx-like guitar sound, and Glenn Roberts and Charlie Martinez make up one of the tightest rhythm sections in Rock N Roll. Band members have individually played with or opened for Joan Jett, Mountain, Dee Snider/Twisted Sister, Ike and Tina Turner, Anthrax, Rick Derringer and Smokey Robinson, among others. Sonic Bliss itself has shared a stage with Winger, Black 47, Richie Havens, Cactus, Blue Oyster Cult and Savoy Brown. Sonic Bliss has built a reputation as one of the finest classic-rock style bands New York has seen. With Loved To Death, Sonic Bliss looks to propel themselves into a higher orbit. It just might work.

Loved To Death opens with Sahara, a big, strutting guitar rock tune that is at times reminiscent of Metallica. Aside from the big guitar work this song has a strong melody and a certain melancholy chutzpah that can not be denied. Far Cry takes off on a tear built of great guitar hooks and an outstanding vocal performance. This song sounds like post-Dennis DeYoung Styx material and is one of the better songs on the album. Better Days is a big acoustic anthem that allows the listener a bit of respite before the explosive hook that opens Home Again bends your mind. Home Again explores the human capacity for greed; the constant need for more and more. The song is full of great harmonies and a vibrant guitar part that very much moves the song along. Babe I'm Dying brings some 1970's funk into the mix, complete with horn section. Not to lay on the Styx references too much, but if you know ever heard Lonely People you'll know exactly what sound I'm talking about here.

It's not so much that Sonic Bliss sounds like anyone in particular, although the Styx and Metallica references have some real weight. It's more that Sonic Bliss engages on a musical playground that so many great bands have visited before. At the end of the day Sonic Bliss has a sound all their own, and that comes across nicely on Dead Sea Of Love, which is probably the best song on Loved To Death. Berrios is absolutely at the top of his game here, and Lea steps forward to the mic as a foil on the chorus to deliver a devastating aural counterpunch. The woman has pipes. In My Dreams opens with an organ interlude that segues into a roiling, angst filled guitar bank. The dark tone and themes roll away into sunlight for just Berrios and church-style organ. In My Dreams comes across as almost prayerfully introspective.

Nail In My Heart with a gypsy-sounding violin dancing along to a plaintive acoustic guitar part with Berrios singing over the top. This is perhaps the most emotionally powerful song on the album, and Lea again joins in to counterpoint Berrios. Save My Soul is an angry, anxious and ultimately desperate plea buried in driven guitars and seismic rhythms. Seven Days is a wonderfully dark rocker with religious overtones and some really unusual guitar work. From a pure Prog perspective this might be the most memorable song on Loved To Death, as it spirals almost out-of-control to its end. As an added bonus there's a live version of Stevie Wonder's Superstitious that will absolutely knock your socks off.

Sonic Bliss uses the concept album format album to drive home eleven powerful songs centered on themes of religion, redemption, belief and the infallibility of human imperfection. Prog/Arena rock fans you've been waiting for this one. Loved To Death brings retro-1970's hard rock into the twenty-first century with a glorious, resounding bang. Check out Loved To Death and see why Sonic Bliss have become almost legendary on the New York scene. You won't be disappointed.

You can learn more about Sonic Bliss at http://www.sonicbliss.net/, where you can purchase a copy of Loved To Death.
Posted by Wildy at 5:05 AM