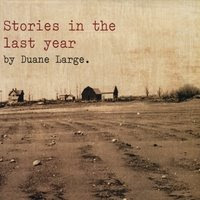 Duane Large is one of the more enigmatic performers in popular music: Influenced by everything from Croce to Dylan; The Decemberists to The Beatles; George Gershwin to Franz Schubert. Large has played with many groups over time, including The Philadelphia Orchestra. His debut CD, Stories In The Last Year, runs the gamut from rock to folk to Tin Pan Alley without losing direction. It's one of the most musically involved pop/rock albums of 2008.

Duane Large has a straight forward Folk/Americana delivery that is without pretension. His songs are written in a crisp, clean, economical style that is both refreshing and fun. Stories In The Last Year opens with Jillian. Jillian bears a strong stylistic resemblance to Jim Cuddy (Blue Rodeo). Your House is a classic singer/songwriter folk song. Large's sweet and mellow voice rings clear throughout and his guitar work in exquisite. Abide is my favorite song on Stories In The Last Year, a love song that doesn't stick to the usual formats or cliche, Abide is a powerful and appealing song that probably has major licensing potential.

Ligeia (Poe) has a European sound to it and a gorgeous melody that you won't be able to get out of your head. The Road Less Traveled uses a classic 1960's guitar emulating a doo-wop chorus to back up a classic sound. Large is very convincing here. Other highlights include Tucked In The Seams, the Celtic The Ballad Of Nelly Holland, and All You Are. All You Are is a classic folk song right out of the gate. This is the sort of song that other artists pick up on and record or perform live.

Stories In The Last Year is aptly named. If Duane Large continues on the path he's on he may well end up as one of the more prolific and talented songwriters of the new century. Every song is crisp and clean with well-defined melodies and intelligent, expressive lyrics. Large is likely to find a big audience with the right break.
Rating: 4 Stars (Out of 5)

You can learn more about Duane Large at www.myspace.com/duanelarge or http://www.duanelarge.com/. You can pick up a copy of Stories In The Last Year at www.cdbaby.com/cd/duanelarge.
Posted by Wildy at 5:00 AM