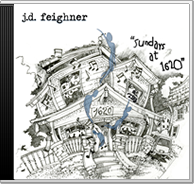 J.D. Feighner comes from a musical family. His dad, mom, maternal grandmother and paternal grandfather all were musically involved for much of their lives. It's no surpise that the Colorado Springs based Feighner found his way eventually into a studio and became captivated with the process of creating and molding musical compositions. Feighner loves to play with sound, and that's very evident on his latest recording, Sundays At 1620. Working with a mix of organic music and electronic sounds, Feighner has created an album that sounds like a soundtrack for post-modern suburbia.

Sundays At 1620 opens with Rude Awakening, a buzzy and fuzzy bit of melancholy hip hop and soul. It's sonically interesting and resolves into a piano epilogue that fades into a voice mail. Pollo Borracho opens with a keyboard intro lifted from the Beatles. Feighner sounds a bit like Ben Folds here as he slides into a highly produced bit of mellow pop. Wavy Baby is a big change in direction, an acoustic guitar based mushy love song that has mix-tape written all over it. Trials opens with an acoustic guitar hook that will sound familiar to Barenaked Ladies fans, and opens up into a big jangly rock song.

You'll want to check out Mellow Ride and I'm Gonna Be Bad. The latter mixes the soul and hio-hop themes heard earlier on Rude Awakening. Other highlights include the ambient Oscillator, the wonderfully contrapuntal Rocky Mountain Hangover, Beautiful Confusion and The Greyside.

Throughout it all, Feighner's best musical weapon is his voice. He's a decent songwriter and adept at the manipulation of sounds into a pleasing structure, but his voice carries these creations to a place that's interesting rather than just unusual or unique. Sundays at 1620 is a pleasant listen with just enough creative spark to keep you coming back. Definitely a fun listen.

You can learn more about J.D. Feighner at http://www.jdfeighner.com/, where you can purchase Sundays At 1620 as a download.
Posted by Wildy at 5:00 AM

I bought this album when a few weeks ago and I love it! Definitely worth the 10 bucks. Really into "oscillator" which I believe is track 8. Give this song few listens and you'll be in love with this track!

What I love about this album is how different and original every song sounds. I'm quite amazed that they were all written by the same person!
Salt Lake City Sal