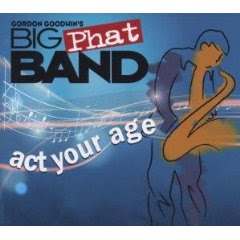 You’d have to say that Gordon Goodwin is one of the more successful composers/arrangers working in Hollywood. His 2006 Grammy Award for his arrangement of the song “Incredits” from the Pixar film “The Incredibles” may be a crowing achievement, but it joins three Emmy Awards and eight other Grammy nominations on his resume. Goodwin established his Big Phat Band in 2000. Artists such as Arturo Sandoval, Eddie Daniels, Johnny Mathis, Michael Brecker, Dianne Reeves, David Sanborn and Take 6 have appeared on previous Big Phat Band albums. The latest release from Gordon Goodwin’s Big Phat Band, Act Your Age, continues the same sort of high quality jazz-hybrid music with a guest list that reads like a who’s who. Sitting in throughout the album are folks like Chick Corea, Dave Grusin, Patti Austin, Art Tatum, Lee Ritenour (who also produced the album) and Eric Marienthal. Add in a bonus DVD and you’ll want to check this out!

Gordon Goodwin mixes the best of jazz, funk and soul into Act Your Age, an album that decidedly does not. Hit The Ground Running is a funky bit of jazz expression that sounds like it should be the theme song to a television show. This is feel good music that makes you want to dance, with just enough rock and roll attitude to give it an edge. Watermelon Man (Herbie Hancock) is more of an 1950's Bop tune, sounding like something you might hear in Vegas on a Saturday night. September (Earth, Wind & Fire) is adisco/jazz hybrid that will get the toes tapping, and features Patti Austin on vocals.

Yesterdays (Art Tatum) is a frenetic tune that shows off some furious piano runs that would make Rachmaninov tingle. Senor Mouse (Chick Corea) is an active bit of piano jazz with a lively bass line. What stands out from Act Your Age is the pure precision with which Gordon Goodwin's Big Phat Band plays. This is fairly complex stuff, crossing stylistic boundaries as easily as breathing. Goodwin's band is top-notch. There really isn't a weak track here, but other highlights include Punta Del Soul, Act Your Age, Backrow Politics and El Macho Muchacho. Also a great add is the bonus DVD, which includes 5.1 versions of all tracks, live material, bios, games and even a mix your own song feature using tracks from the CD.

Gordon Goodwin's Big Phat Band is reminiscent of the days when hot jazz was cool. The melding of jazz, funk, soul and rock may allow Act Your Age to cross barriers and turn new listeners on to all that's great about jazz music. Like Louis Prima and others revolutionized jazz to a new generation in Vegas, Gordon Goodwin's Big Phat Band promises to proselytize the masses into the family of jazz bands. Now if you'll excuse me, I need to go find my Zoot Suit and shades.
Rating: 4.5 Stars (Out of 5)

You can learn more about Gordon Goodwin at http://www.gordongoodwin.com/. You can purchase a copy of Act Your Age at Amazon.com.
Posted by Wildy at 5:10 AM

It will not truly have success, I feel like this.