Review: Welcome To The Cinema - Blocks And Hills 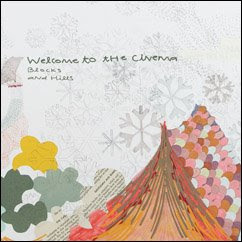 Welcome To The Cinema are a Brooking, South Dakota band who formed on Valentine’s Day in 2006. Their press materials indicate this is due to a lack of dates. What they have created is a band that takes post-modern punk themes and mixes it with British New Wave sounds. The result is a high quality debut album entitled Blocks And Hills.

Blocks And Hills opens with Weekend At The Hamptons, sounding like a British modern rock outfit with Bobcat Goldthwaite on lead vocals. (I'll let readers debate the effect/impact of this). It's a good opening song that shows a sense of urgency, but highly repetitive in lyrical content. Tasty Taste is a very catchy pop rock tune that would have real commercial potential. This is a song that would have played very well among the heavy hitters of the British New Wave invasion of the mid-1980's. Shark Vs. Boat is a jumping post-punk pop song. You could pogo dance your troubles away to this little gem.

Ireland is an interesting composition that caught my attention. There's not a specific reason I can name, but its one of those songs that gets stuck in your head and you can't shake it no matter what you try. Other highlights include Tundra, Ocean Potion and Must Be Love.

Welcome To The Cinema is an intriguing band. The music is very unusual and dare I say, unique. There's a definite post-punk sensibility that runs through most of their material, but also elements of 1980's New Wave. I suspect there's real potential for commercial success here, although the vocalist will definitely be an acquired taste: One of those singers you either love or hate with little middle ground. Blocks And Hills is a fun listen. It's worth checking out.
Rating: 3.5 Stars (Out of 5)

You can learn more about Welcome To The Cinema at http://www.welcometothecinema.com/ where you can purchase a copy of Blocks and Hills, or www.mysapce.com/welcometothecinema. You can also download the album on iTunes.
Posted by Wildy at 5:10 AM