The two best albums of the year, as reviewed by Wildy's World, are upon us. It's been a long trip (and a lot of reviews) to get here, but well worth the wait (and the work). Our #2 release is from one of our favorite songwriters. A guy who started out on the Indie Circuit in a band named after a 1970's TV show opening for the Barenaked Ladies, jumped to a major label, and ended up back on the Indie side of the fence. 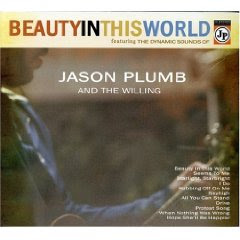 Beauty In This World is one of the first CDs we reviewed and remains one of our favorites. Jason Plumb has always had a penchant for writing these gorgeous songs, often with upbeat or sweet melodies and melancholy to depressing lyrics. Plumb raised his game on Beauty In This World from star quality to genius. This is the most sonically pleasing album of the year. This is the first album Plumb produced entirely on his own, and his DNA is in every note. It's been a long trip from his days with The Waltons, but Plumb has gotten better and better, just like fine wine. I don't believe he tours extensivelly anymore, and you're not likely to find a show outside of his native Canada, so his albums and the live clips on Youtube are probably your best bet to get to know Jason Plumb. Don't deny yourself the opportunity.
Posted by Wildy at 6:00 AM